New City Farm is a 3 acre diverse vegetable farm. We largely grow our produce for a CSA program of 200 members. In 2015 we began value added production of soups, salads, condiments and in 2016 began production of wood fired pizza. Our product is sold to our shareholders during their Thursday pickup time. In 2017 we built an outdoor cafe in order to serve our wood fired pizzas as a pop up outdoor cafe.

In 2016, we tracked data comparing the production of condiments, soups and wood fired pizzas. We determined that the production of soup has the best margins. Our research determined that we made $32.12 per employee hour while making soup, compared to $22.67 while making pizza, and only $16.87 while making condiments. This number does not include fixed costs associated with the initial cost of a commercial kitchen or its annual maintenance. The number is the result of total revenue, with non-farm ingredient costs deducted, divided by total employee hours.

Our research also evaluated which product best utilized seconds produce. When we produced condiments 97.6% of the total product was from farm seconds, 92.3% of the soups were from seconds, and 76.1% of pizzas were from seconds. Pizza needed the most additional ingredients like dough, cheese and oil.

While the margins were best for soup, and while condiments best used seconds, in 2017 the largest demand at our pop up cafe was for wood fired pizza. In 2017, we piloted seven Thursday afternoon pop up cafes. We sold soup, baked goods, salads and wood fired pizza. We grossed $16,920 in total sales from these seven events. $8,710 of these sales were from pizza compared to only $1,823 from soups. Remaining revenue was from baked goods, salads and drinks. We also saw that the pizza sales brought in new customers that were not currently farm shareholders. Soup did not have enough appeal to bring in new customers.

In conclusion, our research determined that soup and pizza production are excellent ways for small farms to increase revenue at a profitable margin. They also reduce farm waste by converting unusable seconds into a profitable product. Further, our pop up cafe exposed our farm to new customers. However, our research determined that production of condiments was not financially viable. Condiments have a low margin and there is generally a low demand for these products if priced properly for small scale production. Our farm plans to increase pizza and soup production into 2018. We intend to host 15 pizza afternoons at our cafe, and we are also including a soup share as an add on to our vegetable CSA. Customers can pay $150 to receive a weekly soup as part of their 22 week summer CSA. Our winter share has included a soup each week since 2016 and customers deeply appreciate having one meal a week already prepared for them. 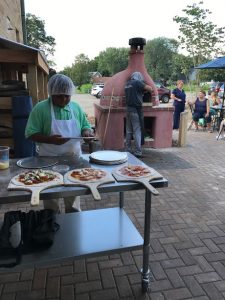 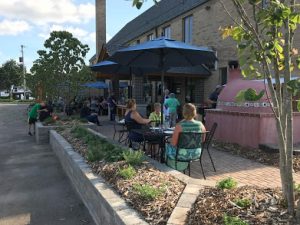 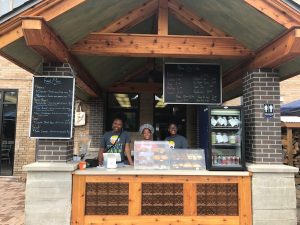 This project will demonstrate how value added production can make use of seconds and excess produce that would otherwise go to waste. This reduction in food waste has a clear environmental benefit. Further, production of pizza and soup on site means vegetable ingredients will travel 0 miles to production. Soup will also be packaged in reusable glass quart containers that can be returned by CSA customers. To measure this impact New City will record total pounds of unmarketable produce used for soup and pizza production.

This project will have two economic benefits. First, it will lead to farmers receiving a higher return for their labor through value added production. New City will measure this by calculating hours spent producing pizza and soup in comparison to revenue received. It will also measure the market value of seconds produce used for pizza and soup production that would have otherwise been lost. This data will help determine which method is more economically effective. The second economic benefit will be an increase in CSA farm share sales because of the expanded CSA experience through soups and pizzas.

We expect the pizza nights at the farm will create a community space at the farm. To measure this communal impact we will measure the total number of participants at each pizza night. This project will also impact our 10 youth employees who will be involved throughout the project. These youth will gain marketing skills, data collection skills, learn customer service skills as they sell to customers, and culinary training.

For our research we determined the average hourly wage per employee hour while producing pizza, soup and condiments. We kept track of total revenue of each product produced, we then deducted any ingredient costs from gross revenue. Finally, we divided the adjusted revenue by total employee hours used for production to determine the hourly wage for each product. The results are indicated in the summary.

In addition, we also researched how to build a wood fired pizza oven. Fornobravo.com was the best resource for sourcing materials and plans for building an oven. Our oven cost $4,000 in materials and took 80 hours to construct. Our oven was built with individual fired bricks. Building your own oven this way requires construction experience. Another way to build an oven is to purchase precast pieces to build the oven core. Materials for an oven of this type are likely to be around $8,000. An entire assembled oven can also be shipped. This would likely cost $12,000.

Lastly, we visited Suncrest Farm and Troy Community Farm in Wisconsin to learn about the logistics of pizza production. Suncrest produces pizza two nights a week. They had originally built an oven outdoors and had recently renovated their kitchen to move their oven indoors to create more kitchen space. Pizza was a major aspect of their farm and the owner stressed the importance of considering crowd management and traffic flow if pizza production is to happen on a weekly basis.

On August 5, 2016 we hosted an on farm pizza oven building workshop with approximately 10 farmers in attendance.

On November 7, 2016 we hosted the West Michigan Growers Group at our site and demonstrated our completed pizza oven. Approximately 30 farmers were in attendance.

On January 28, 2017 we led a presentation about our research at the Michigan Small Farmer's Conference. There were approximately 60 farmers present for our talk.

On February 4, 2017 we led a presentation at the Michigan Family Farm Conference. There were approximately 75 farmers present at our presentation.

We created a youtube video about how we built our oven. https://www.youtube.com/channel/UCUTWP6TSYDdxkXh0mmfhlpQ

On March 3, 2018 we are scheduled to speak at the Indiana Small Farmers Conference.

Our project demonstrated that value added production of soups and pizza is a strong way for farms to become more profitable as well as reducing waste. Our pop up cafe was also a strong connector of the community to our farm. So our project had strong economic, environmental and social impacts.

That said, it is important for other farms to consider several dynamics if they are looking to implement a similar project.

First, farms must talk to their food inspector to determine what infrastructure needs their farm needs to address. Our farm is uniquely situated on the property of a church that already had a licensed commercial kitchen. This was a huge asset. Still, to create a hospitable pop up cafe environment we made a $45,000 investment to the space. We had to construct a covered outdoor area and a pass through window to our commercial kitchen to accommodate our food inspector. We also constructed a patio and purchased outdoor patio furniture. Suncrest Garden Farm built their kitchen in an existing barn and renovated and added to the space as their pizza business grew. It is our sense that farms can only make a value added model work if they have access to a kitchen on their own property. The logistics of moving product back and forth to an incubator kitchen would likely make production too labor intensive.

Second, farms should recognize that production of value added products is a significantly different operation then running a small farm. In our case, we had a farm director devoted and focused solely on the farm and we had a second staff person, a kitchen director, solely focused on the production of value added product through the summer (the kitchen director helps with the farm when kitchen tasks are completed). Our kitchen director also had over 10 years experience working in commercial kitchens; the margins our research indicate reflect this experience. Food safety training is also a required skill set for value added production. Farms with animal waste present should be especially conscious of how safe zones will be created to insure that produced food does not become contaminated.

Lastly, farms should recognize that hosting events on their farm requires a crowd management plan. Where will people park? Where will people eat? What areas of your farm do you want people to walk around? What potential hazards are present on your farm? Who will greet and direct people? Do you have enough staff to manage crowds of people? Seeing Suncrest Gardens Farm was very helpful for us to understand that these are very important questions for a potential pizza farm to consider.

2 Grants received that built upon this project