Chris & Juli McGuire have operated Two Onion Farm since 2003. We initially raised mixed vegetables, but began transitioning from vegetable to fruit production in 2012. We currently raise two acres of apples, one-quarter acre of currants, one-quarter acre of gooseberries, and greenhouse-grown vegetable and herb seedlings. All our farm products are certified organic. We transitioned our farm from vegetables to fruit to meet a strong market demand for local organic fruit and to protect our hillside soils from erosion with perennial crops.

We market our fresh fruit and value-added products through a community-supported agriculture (CSA) program, to local grocery stores and chefs, and to other farms in our region for resale to their customers. We strive to make our produce available to everyone in our community: we sell our fruit at low price to area food pantries and we raise funds from our CSA members to subsidize the cost of CSA memberships for low-income households.

We aim for crop production methods that produce high yields while preserving the environment. We mulch under our fruit crops to reduce weed competition, supply nutrients and organic matter, and nourish beneficial soil fungi. We use drip irrigation to conserve water while producing high yields. Insect pest and disease management can be extremely challenging in organic fruit production. Where possible, we grow disease resistant varieties and use cultural techniques such as sanitation and pruning to reduce disease. We encourage beneficial insects, scout daily for pests, monitor weather to predict pest outbreaks, and only spray organic pesticides as a last resort.

Although gooseberries are not a common food in our region, they are a promising new crop which produces a flavorful fruit suited for fresh eating and processing.  Along with other organic fruit farmers in the region, we have grown gooseberries but found that the Anthracnose leaf spot disease is extremely devastating: it defoliates plants by mid-late summer in most years, increases over the years as a planting ages, and appears to greatly reduce plant vigor and yield.  We have observed that varieties differ in susceptibility and that trellising the plants may lessen the severity of the disease, but we have not found a truly effective organic control that is environmentally benign and effective.  Over two growing seasons, we propose to measure the effects of several factors on disease severity:

We are studying multiple factors because it is likely that a combination of all three factors may be required for effective control.  We will share results with other growers via conference presentations, an online video, and written reports.

3. Measure the effect of three organic sprays on Anthracnose incidence, compared to an unsprayed control.

We conducted this research in an existing 1/4 acre gooseberry planting with four 288' rows spaced 10' apart.  This planting was established as part of an on-farm research project to compare the effects of two training methods (cordon trellis and freestanding bush) on yield, labor, and profitability in four common varieties (Black Velvet, Hinnomaki Red, Tixia, and Captivator).  The planting was laid out in a randomized complete block design. Each row is divided into 12 plots, each 24' long (48 plots total).  Each plot contains one variety grown with one training method; each combination of variety and training method is replicated six times.  Because the planting contains a randomized arrangement of training methods and varieties, it provides an excellent opportunity to analyze the effects of these factors on disease.

A complete description of the cordon trellis training method practiced in this project is available online.  Briefly, in the cordon trellis method, each gooseberry plant is trained to a single permanent vertical stem (the cordon).  Fruit is produced on horizontal branches from the cordon, and these branches are pruned back annually after fruiting.  This method produce an open canopy which is easy to harvest from and which may reduce disease.

To evaluate the effects of organically approved spray treatments in the current project, we used a split-plot design and divided existing 24' plots into 4 sub-plots, each 6' long.  In each plot, the four sub-plots were randomly assigned to one of four spray treatments:

All spray products have been approved by our organic certifier and are labeled for use on gooseberries.  Tank mixes and spray rates were based on label guidelines and manufacturer recommendations.  To avoid spray drift between adjacent plots, we sprayed by hand with a motorized backpack sprayer (Stihl model SR200) in calm weather.

As of December 2021, we have completed the first of two years research for this project.

On June 10th, 2021, we collected data from two shoots on 1 plant in each sub-plot.  One of the two shoots was a vertical stem (the cordon on trellised plants or a strong vertical shoot on untrellised plants) and the other shoot was a horizontal branch originating near 6" above ground.  We purposefully selected shoots not growing near the edges of the sub-plot to avoid ones which may have experienced spray drift.  On each stem we graded disease severity on each leaf growing on current year's growth.  Disease severity was graded on the following scale: D=leaf no longer present, 0=no Anthracnose leaf spots, 1=leaf spots present but covering <1% of the leaf, 2=spots covering 1-5% of the leaf, and 3=spots covering >5% of the leaf.  Few leaves were graded as "Not present" on this date, and analysis showed no difference between treatments in percent of leaves not present.   Ignoring leaves not present, we calculated an average disease severity over all leaves for each shoot.

On September 8, 2021 we again collected data from one vertical shoot and one horizontal shoot per sub-plot, selected according to the same criteria as above.  On this date virtually all leaves had leaf spots covering >5% of the leaf and we did not collect data on disease severity.  However many leaves had dropped from the plants by this data, and Anthracnose causes premature defoliation.  Therefore we counted the number of leaves which had dropped from each stem and the number of remaining leaves and calculated a percent of leaves defoliated for each shoot.

Only one variety, Captivator, yielded significantly in 2021.  We measured the yield separately in each sub-plot.

First Anthracnose symptoms were observed on May 21, and symptoms developed throughout the season, particularly after wet weather.  Defoliation of infected leaves was observed from early June onward.  The first defoliation was on fruit-bearing spurs; current year's extension shoots did not defoliate significantly before July and August.

We will conduct complete statistical analyses after the second year of the trial.  However, some trends were very evident from the first year's data:

1) Trellised plants had less disease in both June and September, presumably because of smaller canopies and better air-flow in the trellised plots. 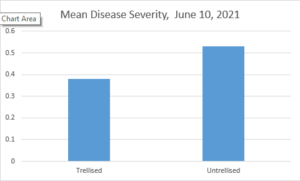 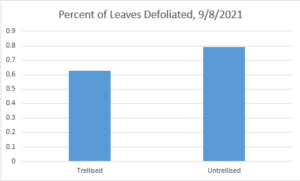 2) In June, Black Velvet had the least disease, and Tixia had by far the most disease, with the other two varieties being intermediate.  By September, Hinnomaki Red stood out from the other three varieties in having the lowest defoliation. 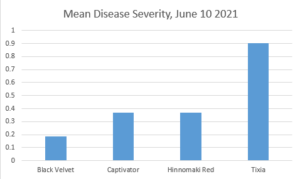 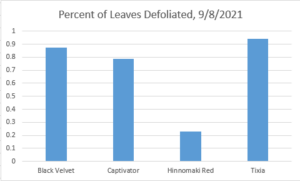 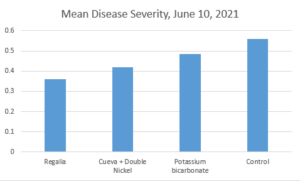 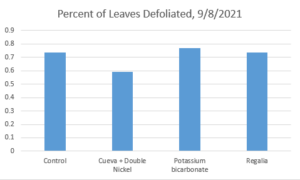 4) The only notable effect of treatment on fruit yield is that Regalia treatment drastically decreased yield, presumably because of phytoxocity and defoliation from the early oil applications. 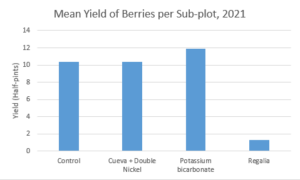 Most outreach will be conducted in 2022, after the second year of field research.  However, we did share preliminary results from this project in 2021 at two webinars.

The first was on July 15, 2021, as part of the University of Wisconsin Cooperative Extension Emerging Crops Webinar Series, aimed primarily at extension agents, researchers, and other agricultural professionals.  I co-presented with farmer Clare Hintz from Elsewhere Farm (Herbster, WI) on gooseberry and currant production, including a discussion of Anthracnose Leaf Spot and this study. A link to the powerpoint presentation accompanying my portion of the webinar presentation is here: Emerging Crops Ribes Webinar July 2021

The second webinar was on December 17, 2021, sponsored by the Savanna Institute.  I presented on the Cordon Trellis method for growing currants and gooseberries, including a discussion of Anthracnose Leaf Spot and this study.  Approximately 25 attendees (a mix of current and aspiring farmers and agricultural professionals) viewed the webinar live, and the Savanna Institute also recorded the webinar and made it available for later viewing.

Additional outreach planned for 2022 includes a Nutshell talk at the Savanna Institute Perennial Farm Gathering, a research poster at the MOSES Organic Farming Conference, a Youtube video on project results, a written summary of project results published online, and articles and press releases to regional farming organizations and farming publications.

20 Farmers reported changes in knowledge, attitudes, skills and/or awareness as a result of their participation
Lessons Learned:

Although we have only completed one year of this two year project, so far we have learned that trellising, sprays of Cueva + Double Nickel and/or Regalia, and resistant varieties such as Hinnomaki Red can all reduce the severity of Anthracnose leaf spot.  None of these practices appears to completely eliminate the disease, so we recommend that growers adopt a combination of two or three of them.  We await the results from the second year of the study before making more final recommendations.

1 New working collaboration
Return to Project Overview
Any opinions, findings, conclusions, or recommendations expressed in this publication are those of the author(s) and do not necessarily reflect the view of the U.S. Department of Agriculture or SARE.