This report comprises our second-year analysis of curly top virus (“curly top”) and its impact on plant outcomes among TomatoCulture heirloom tomatoes for the 2017 season. The farm is in Albuquerque’s North Rio Grande Valley. Curly top is transmitted by the beet leafhopper, the only known vector for this disease. We planted 37 different varieties of tomatoes (one hybrid, the rest heirlooms) into one of three zones, each divided into three different fields with different growing conditions: Either shaded with 30% shade cloth, in open sun, or interplanted with sunflowers for a dappled shade effect (Figure 1). We analyzed rates of curly top infection among the plants by field and condition, testing the hypothesis that shaded plants would have a decreased incidence of curly top due to the beet leafhoppers’ preference for feeding in bright sunlight. A subset of this hypothesis was to test if interplanting with sunflowers provides the same or better results than shade cloth in terms of deterring beet leafhopper feeding and reducing curly top disease. We also analyzed whether the shaded plants would be healthier overall and produce more fruit.

Figure 1 – 2017 three zones with three growing conditions in each. 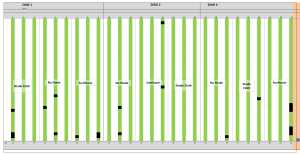 Our objectives did not change from year one:

As reported after year one, the 2016 farming season served up several confounding challenges that undermined the quality of our data and analysis, preventing us from truly testing our hypotheses. As a result, we set out in 2017 to correct the execution problems from the prior year to get a better data sample and draw more accurate conclusions. Here is a summary of the changes we made in year two: 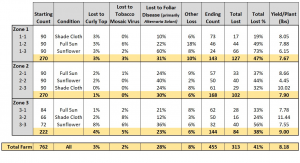 The following points summarize the outcomes of year two by zone and condition (Figure 2):

The data from our year-two curly top analysis testing our hypothesis that shading helps deter beet leafhoppers from feeding on tomato plants is, as in year one, inconclusive.

We recorded 21 plant deaths from curly top virus in 2017 compared with 185 in 2016 (3% compared with 14%, respectively). The loss from the virus was so low in 2017 that it is almost statistically insignificant. We believe that another more important factor emerged as the primary disease prevention strategy resulting in this huge improvement: Covering plants with row cover and keeping them covered beyond the point of highest pressure from beet leafhopper activity. For our growing region, that time is around the third week of June. In 2017, we were able to keep our plants covered until late June compared with the third week of May in 2016. The conclusion here is that our success in avoiding curly top infection in 2017 was mostly due to the plants being covered for a much longer period.

Although our research does not support shading as a curly top prevention strategy, we did note two significant benefits from shading tomato plants with 30% shade cloth:

These results are consistent with what we observed in 2016, as indicated by this excerpt from our 2016 Annual Report:

“Interestingly, per plant yields were highest among our shaded sections in Zones 2 and 3. The shaded section in Zone 1 had the second highest yield per plant. These results suggest that over the entirety of the season, the shading supports healthier plants overall. However, the one overriding factor could be soil fertility.”

We corrected for the uneven fertility in 2017 and ended up with all three zones showing significantly higher yields per plant under 30% shade.

These results confirm one of our secondary hypotheses that light shading helps improve overall tomato plant vigor, health and yields. In theory, plants under shade cloth have less heat stress, slower evapotranspiration, and cooler ambient temperatures during fruit set. They are more effective at fighting off disease and set more fruit during the hottest conditions.

Another interesting observation from 2017 is worth noting. When we mapped curly top losses on the field grid (see Figure 1 above) we noted that most of the curly top losses (75%) occurred along the perimeter of the field. The southwest and southeast corners of the field were particularly vulnerable to beet leafhopper feeding and virus transmission, regardless of shading. The southern, eastern and western edges of the field are all exposed to other open fields, whereas the northern edge, with the least infection from curly top, butts up against a dirt road. The location of curly top infection indicates that beet leafhoppers may move in from adjacent open areas where host weeds exist and do not move much beyond the perimeter of the field. This observation warrants further study of prevention strategies.

Tomatoes Do Not Love Sunflowers

Two other diseases emerged in 2017 that impacted our results. Lab tests confirmed the presence of both Tobacco Mosaic Virus (TMV) and Early Blight (Alternaria Solani). The latter proved particularly devastating, especially in the sunflower sections. We achieved strong stands of sunflowers in all three zones because of successful direct seeding (and thereby achieved the desired shading effect). Unfortunately, the data indicates that the sunflower plants not only did not deter beet leafhoppers, but acted as disease vectors, spreading early blight (and other foliar diseases) to the tomato plants. In all three zones, the sunflower sections had the highest losses from foliar diseases, by significant margins. These sections also had the lowest yields.

After correcting execution errors that set us back last year, our second year provided a much better data set to evaluate our hypotheses and we were able to draw several conclusions from our research.

10 Producers reported gaining knowledge, attitude, skills and/or awareness as a result of the project
Return to Project Overview
Any opinions, findings, conclusions, or recommendations expressed in this publication are those of the author(s) and do not necessarily reflect the view of the U.S. Department of Agriculture or SARE.