This project provided research and education for vegetable growers with small farms interested in understanding and enhancing biological control for one of the worst insect pests of solanaceous crops. As a direct result of this project, we were able to reach an audience size of almost 400 growers, producers, and scientists to discuss the impacts of sustainable agriculture practices on beneficial insects. Results from this project show that abundances of the two most common beneficial stink bug species in eggplant fields are driven by different causes. Perillus bioculatus, a specialist predator, responds to abundances of its prey, while Podisus maculiventris, a generalist, responds to the presence of cover crop residues. The survival of the eggs of both species was decreased by the presence of cover crop residues, primarily as a result of parasitism. Cover crop residues remain an attractive option for growers, because of their ability to suppress pests and attract predators, but the risks of indirect effects on predators require further study.

Eggplant, Solanum melongena L., is a favored food for Colorado potato beetle (CPB), Leptinotarsa decemlineata (Say), a common insect pest capable of causing intense defoliation leading to extreme yield loss. Eggplant is often grown on small farms where long distance crop rotation isn’t always feasible. Previous work has shown increasing the diversity of eggplant habitats with straw or winter cover crops can slow CPB invasion, reduce their numbers, and increase predator density. To take full advantage of cover crop use in eggplant requires understanding how its presence influences two common predatory stink bugs, Perillus bioculatus (Fabricius) and Podisus maculiventris (Say), which feed on CPB. While these are voracious predators, their numbers are greatly suppressed by wasps which parasitize their eggs. These wasps use a variety of chemical and environmental cues to locate stink bug eggs and their searching behavior may be disrupted by cover crop presence. The goal of this project was to examine how different cover crop residues impact the density of predatory stink bugs and the rates of predatory stink bug egg predation and parasitism, and to use these findings to create sustainable pest management strategies for eggplant growers throughout the Northeast.

3. Assess the total number and species composition of parasitoids present in eggplant fields. What species occur and in what numbers? Does species diversity change throughout the season?

4. To create and disseminate an effective pest management strategy to stakeholders. How can farmers maximize their economic output with sustainable practices?

During the fall preceding the years of 2014, 2015, and 2016 fields were selected at the Central Maryland Research and Education Center (CMREC) in Upper Marlboro, Maryland (38.861449, -76.776148) and designed as a randomized complete block split plot design with each treatment replicated four times. In 2016 an additional field was planted at the Western Maryland Research and Education Center, but CPB and predatory stink bug numbers were too low to include in data analysis. Each block consisted of three winter cover crop treatments: 1) crimson clover, Trifolium incarnatum L. (clover), 2) a mixture of clover and rye, Secale cereale L., (mix), and 3) a no-cover crop fallow control (fallow).

For consistency, all fields followed a field corn planting the previous year. In the fall preceding each study year cover crops were seeded at a rate of 25.8 kg/ha in the clover treatment, and at rates of 14.6 kg/ha clover and 72.9 kg/ha rye in the mix treatment. Treatment plots were 12.2 m by 11.9 m, and separated by 9.1 m alleys, which were planted with rye at rate of 135.6 kg/ha, and mowed on the date of first tillage each year. Alleys with flail mowing throughout the season by flail mowing as needed. Tilled rows were 20 cm wide separated by an 83 cm untilled inter-row.

In 2014 and 2015, eggplant var. Nubia was selected for this experiment, however, in 2016 this variety was unavailable and so var. Clara was selected as a replacement (both from Johnny’s Selected Seeds®, Winslow, ME). Eggplant was seeded in 48 mm² plug flats and kept at the University of Maryland’s Research Greenhouse until planting. Eggplants were transplanted using a hand-held transplanter (Stand ‘n Plant®, Saltsburg PA) in early summer. Thirteen plants were planted in each row spaced 91 cm apart. Eight rows were sampled, and 1 buffer plant at both ends of each row was not sampled (88 measured plants per subplot, 55 were buffers). Natural rainfall was supplemented with 6mm ID drip irrigation with 30 cm spacing, and calcium nitrate fertilizer (15.5-0-0) was applied twice per season around the base of each plant. In 2014, a total of 9.4 kg N/acre to replicate previous work (Hooks et al., 2012, 2013). In 2015 and 2016 fertilizer input was increased to the recommended 56.7 kg N/acre (Wyenandt et al., 2016). Weeds were managed by hand weeding, except at CMREC in 2016 when weed pressure was very high, and weeds were managed between rows with a rototiller.

One week after planting, weekly insect counts commenced. Colorado potato beetle, and predaceous stink bugs (P. bioculatus and P. maculiventris), were counted according to their stage (egg masses, larvae/nymphs, and adults). During insect counts, visual inspections were made of all non-buffer plants, and numbers were recorded for each plot. Insect counts were conducted every seven days for eight weeks, at which time CPB pest numbers were generally low, and harvest began. Stink bug egg masses located during weekly insect counts were marked with flagging tape, and the number of eggs was recorded. Egg masses were monitored for one week, and any egg masses with unhatched eggs were collected and stored at 25°C in the laboratory to allow enough time to pass for any parasitoids to emerge. After six weeks, eggs were examined microscopically and categorized as 1) successfully hatched, 2) killed by parasitoid wasps 3) killed by predators. Eggs which could not be located were categorized as missing, and not included in the analysis.

Parasitoid wasps that emerged from collected stink bug egg masses were stored in 70% ethanol, and then dried and point mounted for identification.

When a significant effect of treatment was observed, models were analyzed with with the glht function in the car package (Fox & Weisberg, 2011) to test for significant interactions between treatments. Back-transformed means and confidence intervals were expressed using the effects package (Fox et al., 2016). Correlations between CPB larval abundance across all three years and both species of stink bug were performed using the regression function in Microsoft Excel 2016. 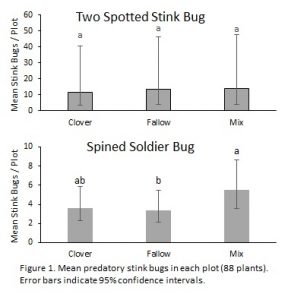 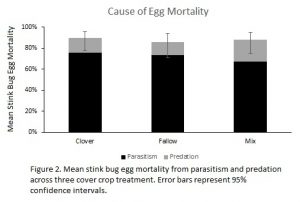 This suggests that cover crop residues may provide increased risk to beneficial stink bugs, and that CPB pest suppression observed by previous studies (Hooks et al. 2012) is likely despite, and not because of, effects of cover crops on beneficial stink bugs. However, higher predation in the mix treatment, coupled with higher numbers of the generalist P. maculiventris, suggests that the more diverse habitat provided by the rye and crimson clover may be more attractive to predators than clover alone.

Only two species of parasitoid wasp have been identified as emerging from P. bioculatus eggs, Telenomus chloropus and Trissolcus euschisti, (Jermy, 1962; Herting, 1971; Polaszek & Kumar, 2007, Krombein et al., 1979; Johnson, 1984), yet at least five distinct morphotypes were reared from P. bioculatus eggs. At least one of these species is a hyperparasitoid. These specimens are still awaiting species identification.

This study provided evidence that mixed cover crop residues may increase populations of spined soldier bugs, a generalist predator. Spined soldier bugs were more abundant in mixed treatments, but were not correlated with CPB larval numbers, suggesting that habitat, and not prey availability may be a primary driver for their populations. This provides a new possibility for biocontrol in a wide variety of vegetable systems.

Two-spotted stink bug is the most abundant predatory species we observed, and is a specialist on CPB, it is likely providing the majority of biocontrol. Because abundance of the two-spotted stink bug was not affected by treatment, it is likely that predation is unaffected by cover crop residues. This suggests that pest suppression from biocontrol may be additive with any suppression from cover crop residues.

This study revealed that high egg mortality is likely a leading factor prohibiting the effective control of CPB by beneficial stink bugs, and that the primary driver of mortality is parasitism. Currently, the direct suppression of CPB by cover crop residues provides a much more attractive solution to growers than biocontrol. Unless the survival of beneficial stink bug eggs is vastly improved, they will likely remain a very minor component of sustainable CPB management programs relative to cover crop residues, with growers much more likely to accept a possible risk to a minor component in exchange for a major one. 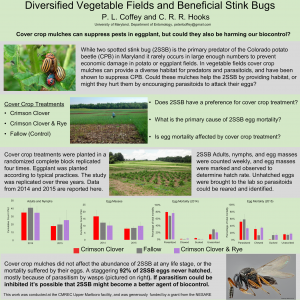 Additionally, now that parasitism has been determined to be the primary driver of egg mortality, it's possible that further research could reveal methods of decreasing parasitism, thereby improving biocontrol. Several specimens of an as yet unidentified hyperparasitoid were collected, proving that the parasitoid wasps attacking beneficial stink bug eggs are themselves vulnerable to parasitism. If populations of this species could be encouraged or released they may decrease parasitism rates, which in turn may increase egg survival.

Additionally, observations during this study revealed that the leaves of the eggplant varieties used in this study react with beneficial stink bug egg masses by creating a necrotic area under the egg mass. As these areas desiccate they will shrink, causing the egg mass to dry and to flake off. Our observations revealed that after several days egg masses detached very easily and this likely explains a large number of the 26% of egg masses that were categorized as "missing." This is a common defense mechanism in plants to reject egg masses of pest insects, but in this case it is fighting against a beneficial. This is possibly a vestigial trait, or an adaptation to a pest in eggplant's native range. There are hundreds of eggplant varieties, and it's possible that some may lack this trait and be more hospitable to stink bug egg masses.