These experiments demonstrated that legume cover crops can be viably interseeded with a modified drill into double-crop soybean in late summer as a strategy for incorporating legume cover crops into the predominant mid-Atlantic US cropping rotation. The field trials also demonstrated the specific benefits of integrating legumes into cropping rotations, namely increased N cycling efficiency and resiliency to extreme weather patterns characteristic of climate change.

The specific objectives of this research were to:

(2) Evaluate the effect of interseeded cereal rye-legume cover crop mixtures on wide-row double-crop soybean yield. Hypothesis: there will be no difference in yield between wide-row (76 cm) soybean grown with and without interseeded cover crops.

In the mid-Atlantic region, the inclusion of double-crop soybean in wheat-soybean-corn rotations limits legume cover crop adoption due to the shortened window for establishing cover crops after the soybean harvest. Double-crop soybeans are harvested in mid-November; however, legumes must be seeded by early October in this region to ensure establishment and high biomass production. This limitation is problematic because a cereal rye-legume cover crop mixture could provide erosion control in the fall and winter and nitrogen to the following corn crop in the spring. The purpose of this project was to evaluate a novel cover crop interseeder technology, which allows growers to drill cover crops into a standing soybean crop. This practice could transform growers’ ability to integrate legume cover crops into a grain rotation and offset inorganic nitrogen fertilizer needs in the corn phase. However, it would require transition from a narrow-row soybean spacing (19 - 38 in) to a wide-row spacing (76 cm). Specific objectives of this study included: 1) quantify the effect of row spacing (38 cm vs 76 cm) on double-crop soybean yield; 2) evaluate the effect of interseeded cover crops on wide-row double-crop soybean yield and harvestability; 3) determine the legume species which, in combination with cereal rye in wide-row double-crop soybeans, produces the largest amount of cover crop biomass; and 4) quantify nitrogen contribution of cover crop mixtures to corn yield.

Table 1. Soil properties and study years of double-crop soybean-cover crop trials in the mid-Atlantic US.

All nine field experiments were initiated in the double-crop soybean phase of a two-year rotation of winter wheat/double-crop soybean - corn. Double-crop soybean at five of the sites were interseeded with cover crop treatments (North, Hayden, South, East, and Carvel Farms). Cover crop establishment was successful at three of the interseeded sites, which were maintained through the winter (North, Hayden, and East Farms). Two sites were discontinued after soybean harvest due to insufficient measurable cover crop biomass growth (South and Carvel Farms). Of the three sites where cover crop establishment was successful, North and Hayden Farms for continuation of the experiment past cover crop termination into a second year. These two sites were planted with corn and the experiment was concluded the following fall at corn harvest. The four fields at Powder Mill Farm in 2019 were included to expand the number of site years examining the effects of soybean row spacing on yield. Therefore, these fields were not interseeded with cover crops, and the experiment concluded at double-crop soybean harvest.

After cover crop termination in the spring, we continued the experiment at North and Hayden Farms and planted corn into the cover crop treatment plots. In June, we divided the corn growing in the cover crop plots into six subplots of 3 m wide and 9 m long (North Farm, 2017–2018) or 18 m long (Hayden Farm, 2018–2019). These subplots received the same amount of N at planting (34 kg N ha-1), but each received a different N sidedress fertilizer rate at corn growth stage V6 (0, 34, 67, 100, 135, and 190 kg N ha -1). Placement of fertilizer subplots was randomized within each larger cover crop plot.

Table 3. Soybean and cover crop planting, harvesting and termination dates at field sites where soybean yield and cover crop biomass were analyzed by cover crop treatment  were collected (Objectives 2 and 3).

Table 4. Cover crop planting species and seeding rates for a double-crop soybean interseeding experiment in the mid-Atlantic US.

The following spring, the entire experimental site was treated with herbicide to terminate cover crops and control weeds.

Data collection. Within one day of interseeding the cover crop treatments, light transmission through the soybean canopy was measured using a point sensor and light bar sensor (LI-COR BioSciences, Lincoln, NE). Soybean was harvested in November for all three years, except at East Farm in 2018, which was harvested in December due to wet field conditions. Soybean yields were collected from the whole plot with a combine and weigh wagon, except at East Farm in 2018. At East Farm, the middle two rows of the plots were collected for a length of at least 6 m with an Almaco SPC-40 Specialized Plot Combine (Almaco, Nevada, IA) with integrated weight scale to avoid driving the harvest equipment through the flooded and waterlogged sections of the field. Soybean moisture levels were measured on sub-samples of each plot harvest using a harvest moisture meter (Churchill Industries, Minneapolis, MN) and then adjusted to 13% moisture.

To evaluate corn yield, the center two rows of corn from each sidedress treatment subplot were harvested with the Almaco SPC-40 specialized plot combine. Corn grain moisture was measured by the integrated combine moisture meter for each N rate plot in 2018 and as a whole plot area mean in 2019, and then grain weight was adjusted to 15.5% moisture content.

To analyze subsequent corn yields, we tested an ensemble of models with cover crop treatment, N rate, and their interaction as fixed effects and block as the random effect. All LME models for corn yield were run using the lme function in the nlme package in R with the maximum likelihood method (Pinheiro et al., 2020). We first assessed curves describing plateau, linear, quadratic, linear plateau, and quadratic plateau mixed effects models of corn yield response to N rate by cover crop species. Model selection was conducted using likelihood ratio tests on hierarchically nested pairs of models (e.g., adding or removing a single coefficient at a time). The following two models were fit; each coefficient was estimated for each cover crop treatment:

where Y is the dependent variable [corn grain yield (Mg ha-1)] and X is the N rate (kg ha-1). P is the plateau Y value and XP is the value for X at which the linear or quadratic response meets the plateau. After selecting the model according to the likelihood ratio tests, coefficient contrasts were conducted with the emmeans (Lenth, 2019) and multcomp (Hothorn et al., 2008) packages. Goodness-of-fit for each model was reporting using an R2 analog that is derived from the likelihood ratio test (Magee, 1990; Kramer, 2005):

where logLM is the log-likelihood of the model of interest, logLO is log-likelihood of the intercept only model, and n is the number of observations. No transformations were necessary to improve the normality of the soybean yield, cover crop biomass, or corn yield data sets. Analyses were conducted in the R environment for Macintosh (R Core Team, 2020).

At this stage, I have finished collecting and analyzing all of the data pertaining to Project Objectives 1, 2, 3, and 4.

Experimental result: No significant differences in soybean yield were detected between narrow (36 cm) and wide (72 cm) row spacing treatments (n.s.) in 6 out of 8 field sites where tested. At the two field sites in 2019 that showed lower yields in wide-row soybean than narrow-row soybean, the differences were minimal and the yields in the wide-row soybean (2.8 and 2.7 Mg ha-1; Fig. 3) were still higher than mean soybean yields across the state of Maryland from 2013-2017 (2.4 Mg ha-1; USDA NASS, 2017).

At East Farm in 2018, yields were not included in the analysis of the row-spacing effect because the double-crop soybean yield of the narrow-row spacing was not collected at that location due to crop injury. 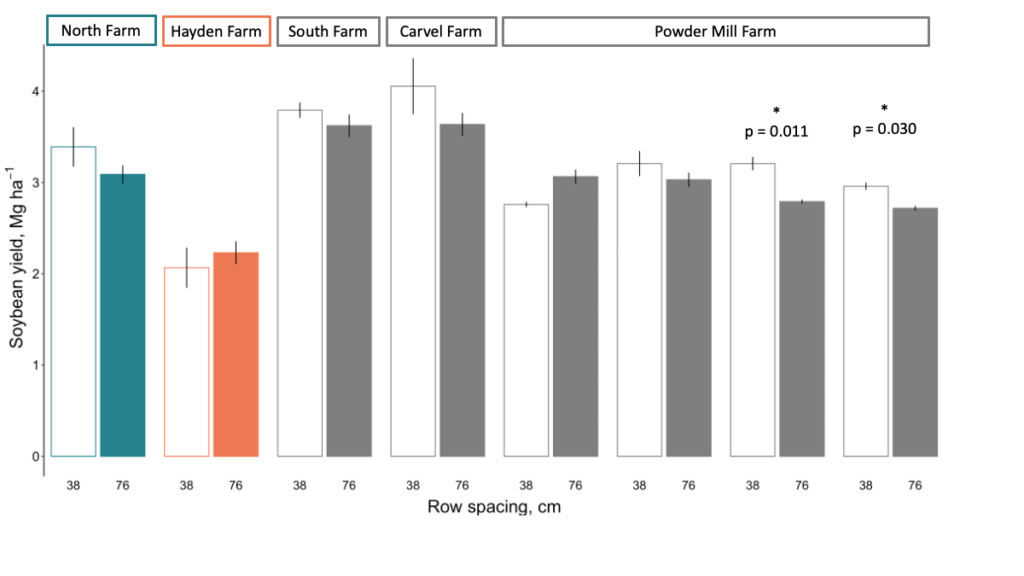 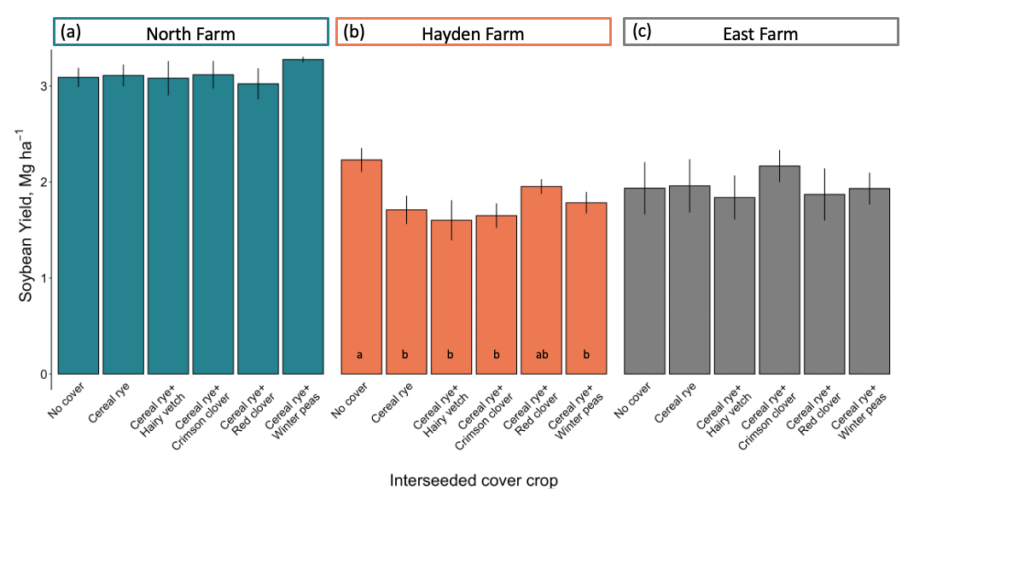 Objective 3. Determine the legume species which, in combination with cereal rye in wide-row double-crop soybeans, produces the largest amount of cover crop biomass. 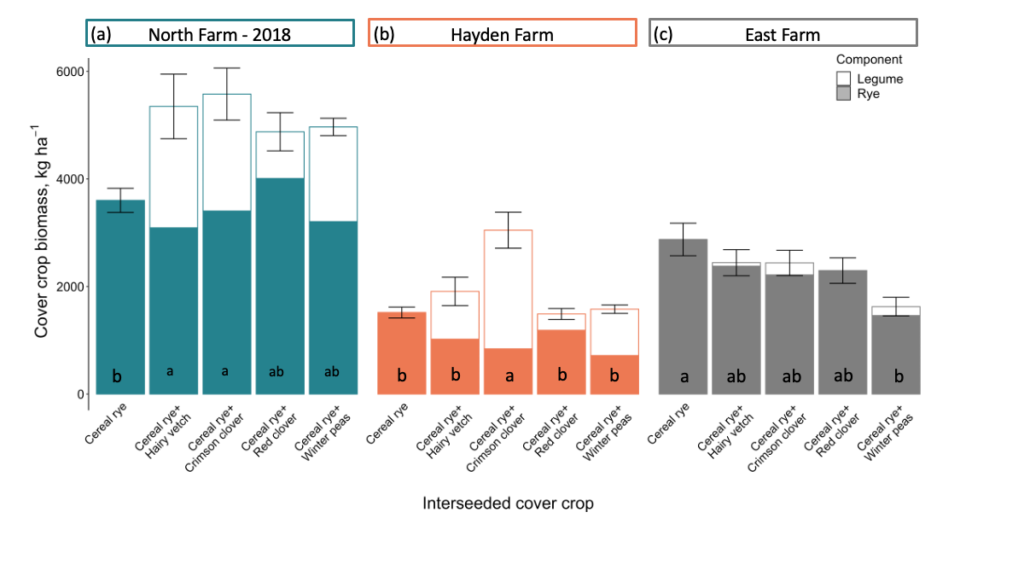 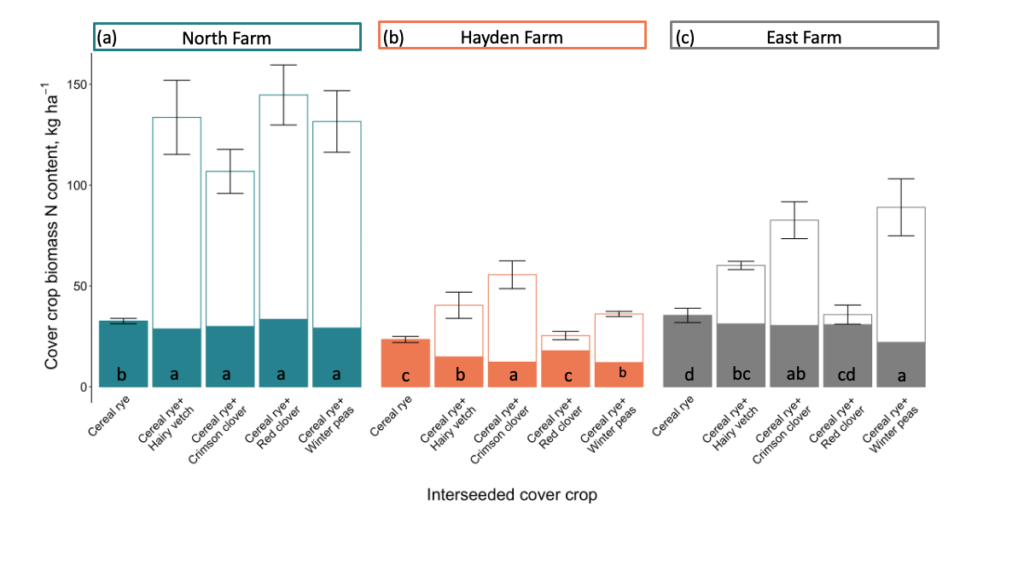 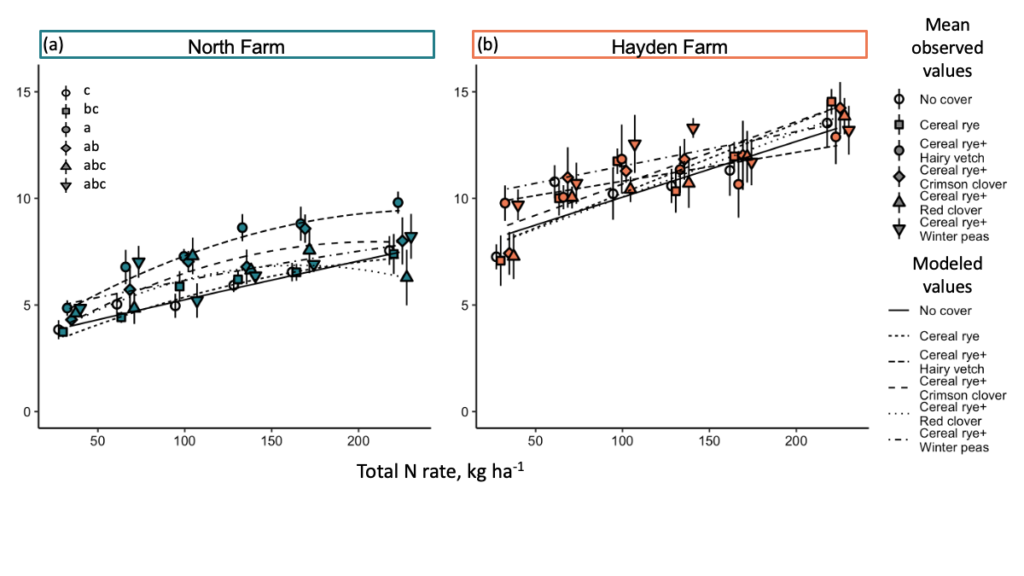 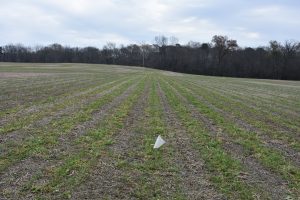 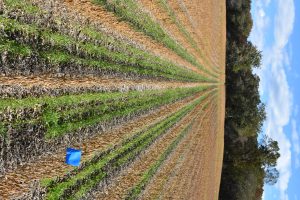 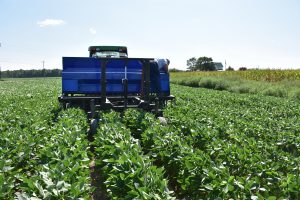 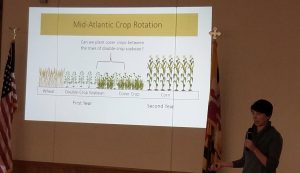 These experiments demonstrated that legume cover crops can be viably interseeded with a modified drill into double-crop soybean in late summer as a strategy for incorporating legume cover crops into the predominant mid-Atlantic US cropping rotation. The data from eight field site years suggest that widening row spacing from 38 cm to 76 cm to accommodate interseeding in the mid-Atlantic US poses minimal risk to double-crop soybean yields. Additionally, interseeding cover crops at soybean growth stage V5-V7 had little to no effect on the yield of double-crop soybean planted in 76 cm wide rows. By interseeding the cover crops into double-crop soybeans in late summer, legumes were successfully established in mixture with cereal rye, accumulating higher total spring cover crop biomass and N content than cereal rye alone. Corn yield results indicated benefits from the cereal rye + legume mixtures when total cover crop biomass reached 4-8 Mg ha-1, which mitigated crop losses from extreme weather in 2018. Climate change is expected to bring more intense and frequent rainfall in the mid-Atlantic, so it is expected that the region will experience more years with heavy rainfall patterns similar to 2018. Increasing legume cover crop adoption with this improved method of interseeding can benefit N management and climate change resilience on farms in the mid-Atlantic US.

On December 5th 2018, I presented my preliminary results and field trial experiences to farmers and agricultural educators at the Kent Country Harvest Breakfast in Chestertown, MD.

In September 2019, I published a newsletter article for the University of Maryland Extension Agronomy news blog.The extension article focused on presenting the initial results and experimental observations from the first rotation of the soybean row spacing and cover crop treatments.

In November 2019, I attended the annual ASA-CSSA-SSSA meeting in San Antonio, TX to present research findings during a fifteen-minute oral presentation.

Also in November 2019, I participated in the Northeast Cover Crops Council Annual Conference poster session and field day tour of the Beltsville Agricultural Research Center. During the field tour, I was able to describe the interseeding field trials and present how the InterSeeder drill planter was used in the research.

January 6-8th, 2020, I attended the Northeast Plant, Pests, and Soils Conference in Philadelphia, PA, where I presented a poster with updated analysis of the corn yield data for the fourth objective.

In November 2020, I attended the annual ASA-CSSA-SSSA meeting, which was moved to a virtual format for the week of November 9th-13th due to the corona virus pandemic. I shared a 15 minute video presentation and organized a 30 min round table discussion as permitted by the online meeting format.

The purpose of this project was to evaluate a novel cover crop interseeder technology which allows growers to drill cover crops into a standing soybean crop. This practice could transform growers’ ability to integrate legume cover crops into a grain rotation and offset inorganic nitrogen fertilizer needs in the corn phase. Planting cover crops in a timely manner in the fall to ensure that enough biomass is accumulated to provide the ecosystem and economic benefits of cover crops to the farm and farmer continues to be a central challenge to cover crop adoption rates in the mid-Atlantic region. By utilizing this interseeding technology, farmers stand to benefit from participation in the state cover crop subsidy program as well as decreased spending on nitrogen fertilizer for the following crop and stronger resilience of cropping systems to the extreme weather patterns of climate change.

This project has strengthened my interest in developing techniques for large-scale farming to shift towards more environmentally and economically sustainable methods. The length of each experimental field trial session has allowed me to see the range of how adoption of this interseeding method would impact a full two-year crop rotation on a commercial farm. Additionally, with the opportunity to run two rounds of these two-year field trials has come the benefit of seeing how the interseeded double crop soybeans and cover crops perform in very different weather and in different locations with different soil types.