Over the course of this research project, ASAP developed and tested a theory centered on the idea that substantive food system change relies on broader food system participation and a process that provides people with ways to engage with food and agriculture in meaningful ways. Within this theoretical framing, research questions asked how and why local food system building in particular could be a catalyst of positive food system change and what strategies and actions could facilitate that change. Findings of the research fall into two key areas. The first area describes impactful strategies used by leader farmers, successful food entrepreneurs, and advocates and organizers for place-based food systems. The second area focuses on the impacts of these strategies - tangible changes in the region’s farming and food system as well as in the underlying conditions that have supported them.

Research dissemination was a significant focus of Phase III. Dissemination activities included developing reports of findings, presenting findings at academic and farmer conferences, and creating tools and resources for local food system stakeholders to use to support their efforts to farm, market, and/or organize.

The analysis of 1997-2017 USDA Census of Agriculture data assessed changes to food and agriculture in Western North Carolina in relation to the federal tobacco buyout and to efforts to develop markets for locally grown food as a market for the region’s farms. Major findings include:

Research on the impact of local food and farm experiences:

Overall the research demonstrates that direct experiences with local food and farms are a powerful way to cultivate interest in food and food production, instill a concrete sense of being in community, and activate engagement with the food system. Farmers markets and on-farm events are highly social spaces where participants can interact and learn about farming and food production. Findings show the impact of these experiences on participants: 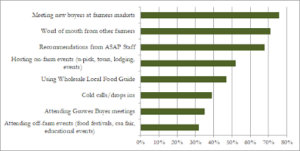 Findings from the 2020 survey show the highly adaptable nature of the region’s smaller scale farms and equally the presence of a supportive community, which gave farmers options and enabled them to transition to different market outlets in the midst of a disruptive pandemic.

This research assessed the effectiveness of various resources and support for farmers markets. This led to content developed for market promotions, workshops, market leadership summits, and promotional activity kits for markets. Farmers Markets, especially rural, low resourced markets have limited staff time, so the most effective forms of support were those that reduced cost and made the most of limited staff and resources, but provided the structure that allowed individual markets flexibility to customize. This includes multimarket events, and turn-key promotional kits, such as a “love your market” social media contest or a newly created dot survey kit to engage customers, and health and wellness fairs to expand outreach. Options for at-market interactive promotional resources and display materials were limited by COVID related “touch free” restrictions for customer engagement. Instead, welcome to the Market videos for virtual market promotion and customer engagement, allowed managers to give virtual walk throughs to increase customer familiarity with market customs.

Though project findings have implications for and inform farmer education, this is a research-based project.

Since the last annual report, three research papers have been developed:

Farmers-market resources were also created in keeping with findings that point to their significant role in local food system building efforts:

Research findings have also been integrated into existing ASAP programmatic work  focused on outreach and education for farmers as well the public:

6 Grants received that built upon this project
Project outcomes:

Growing Local has significant implications for the work of food movements, and the research confirms the importance of increasing participation in the food system in order to change it. Specifically, findings point to the vital role of direct experiences with farms and food for engaging individual community members and developing support for a food system in the Western NC region that is progressively rooted in the land, local farmers, local relationships, and communities. The research identified vital strategies to the work of organizers and to the livelihoods of farmers and other local food system stakeholders.

In relation to local food campaign activities, findings paint a picture of a region that has come to appreciate local farms, embrace local food production, and value the ability to prioritize supporting their local food economy. The economy that has grown up around local farms and food has created a resilience in farming that was not present when tobacco production for impersonal, national markets dominated.

Throughout the project, findings identified key points of intervention for furthering local food system building efforts, informing the strategies and actions of ASAP. The research has been used to secure key multi-year funding from the Farmers Market Promotion Program, the Beginning Farmer and Rancher Development Program, the Dogwood Health Trust, and other grant programs. These projects have focused on expanding direct market opportunities for farmers in the region through training, technical assistance, and promotional work.

This unique funding opportunity provided both for a long-term perspective and the ability to keep a research team together for an extended period. The greater impact of this is documented in a report that describes this 10-year research effort and summarizes the findings and overall conclusions. Available upon request.