We recorded behavior of livestock protection dogs (LPDs) as the first step toward developing strategies for mitigating conflicts between LPDs and recreationists on western rangelands. Our field study was conducted on foothill and mountain rangeland of southwestern and west-central Montana. We placed Global Positioning System (GPS) collars on LPDs and sheep to document how far, and under what circumstances, LPDs travelled away from the sheep they were protecting. We evaluated the behavior of 13 LPDs during summer and fall across seven ranches and three years. Overall, roaming distance (i.e., distance between the LPD and the sheep they were protecting) averaged 198 m (0.1 mile). Female LPDs roamed 83 m (272 feet) farther from their sheep than male LPDs, and roaming distance of both sexes averaged 42 m (138 feet) more during summer than fall. Roaming distance did not differ between LPDs cohabiting with or without high densities of wolves and grizzly bears. LPDs remained closer to their sheep during mid-day and roamed farther away at night, but mean roaming distance of the 13 LPDs never exceeded 300 m (0.2 mile) during any hour of the day or night. However, the maximum roaming distance recorded of every LPD exceeded 400 m (0.25 mile). The American Sheep Industry Association (ASI) currently recommends that sheep and associated LPDs be kept at least 400 m (0.25 mile) from any trailhead, campground or picnic area during weekends, holidays, or other high potential recreational use periods. Our results suggest that keeping range sheep 200 m (0.1 mile) away from recreation sites will markedly reduce the likelihood of LPD-recreationist encounters. Keeping range sheep 400 m (0.25 mile) away from recreation sites will prevent most, but not all, encounters between LPDs and recreationists.

Livestock protection dogs (LPDs), or guard dogs, have been used worldwide for centuries to limit cattle, sheep, and goat depredation by wild predators. Widespread use of LPDs in the western US, however, did not begin until the latter 1970s after passage of the Endangered Species Act and concurrent restrictions on the use of poisons for lethal predator control. Research in the 1970s and 1980s helped develop management strategies for using LPDs, and LPDs were proven effective for protecting livestock (mostly sheep) from predation (mostly by coyotes). Very little research has occurred with LPDs since the 1980s, but the situation in the western US has changed dramatically in the past few decades, providing new challenges. Two of the biggest changes have been: 1) the expansion of wolf and grizzly bear populations, and 2) the expansion of human recreation and exurban residential development on forest and rangeland landscapes. These two changes have converged to threaten the continued use of LPDs for protecting livestock from depredation.

Beginning in the 1970s, LPDs in the western US were selected for their aggressive behavior against predators (mostly coyotes) and non-aggression to humans. Most sheep and goat ranchers in the West, and increasing numbers of cattle ranchers, could not continue producing livestock without the use of LPDs. However, increasing concerns about potential conflicts between LPDs and human recreationists are threatening the continued use of LPDs. For example, in a widely publicized incident in Colorado, a mountain biker was attacked by two LPDs on a public land grazing allotment. The rancher was held liable for having dangerous dogs not under control on federal public land. In response, the American Sheep Industry Association (ASI) developed an initial set of Best Management Practices (BMPs) to help livestock producers optimize the use of their LPDs while minimizing potential conflicts with neighbors and recreationists. One BMP recommends that livestock and associated LPDs should be kept at least 0.25 mile from any trailhead, campground or picnic area during weekends, holidays, or other high potential recreational use periods. No data currently exist to support or refute this recommendation.

Proactive, innovative strategies are needed to mitigate potential conflicts between LPDs and humans on western landscapes that support ever-increasing numbers of large carnivores and humans. The first step toward developing these strategies is to study LPD behavior when cohabiting with or without high densities of large predators such as wolves and grizzly bears.

Our project aimed to create and disseminate new knowledge about LPDs to help sheep producers, sheep industry organizations, and government agencies refine their BMPs for LPDs. Ultimately, we desired to help sheep producers make their livestock grazing enterprises more sustainable and to better enable these enterprises to: 1) sustain or increase their production of food and fiber, and 2) sustain or increase their ecological, economic, and social contributions to society. Our objective was to examine how far, and under what circumstances, LPDs traveled away from the sheep they were guarding. We examined whether LPD behavior was influenced by season (summer vs. fall), sex (male dogs vs. female dogs), time of day, or whether the landscape was cohabited by high densities of wolves and grizzly bears.

We placed GPS satellite data collars on a total of 20 LPDs and 31 sheep (mature ewes) during summer (May, June, July, August) or fall (September, October, November, early December) across eight ranches and three years (2012, 2013, and 2014). One band of sheep was studied per ranch, with each band comprised of 800 to 1000 mature ewes, 1200 to 1500 lambs, and 400 to 500 yearling ewes. All eight bands were herded, and all eight bands grazed within their traditional summer-fall grazing areas in foothill and mountain rangeland of southwestern and west-central Montana. Three bands were located in landscapes cohabited by high densities of wolves and grizzly bears. Sheep depredation in the remaining 5 landscapes historically was low to moderate, mostly by coyotes. At least one LPD and one sheep was collared per band. For bands with more than one collared sheep, the sheep with the greatest number of recorded GPS locations was used for data analyses. GPS locations were recorded at 5-minute intervals (24 hours per day) with 5-m accuracy.

We used ArcMap (Version 10.3.1) to convert GPS latitude and longitude records of LPDs and sheep to UTM coordinates. Next, we used R statistical software (R Core Team 2014) to calculate hourly mean UTM coordinates, and subsequently we used the Pythagorean Theorem to calculate the hourly mean roaming distance of each LPD (i.e., the distance between each LPD and one sheep within the sheep band that the LPD was protecting).

We used generalized additive models in R (R Core Team 2014) to investigate potential nonlinear responses of roaming distance to time of day. We inspected plots of predicted relationships and partial residuals to transform smoothed variables into polynomials that approximated nonlinear relationships (Crawley et al. 2005). A second order polynomial (i.e., quadratic effect) was determined to be most appropriate for time of day because models with linear effects for time of day, or models without time of day effects, performed poorly (AIC wi > 0.99). Therefore, we only considered a quadratic effect for time of day in subsequent multivariate model evaluation.

We used linear mixed effects models with Gaussian (normal) error structure to build 17 candidate models. In addition to the quadratic effect for Time of Day, we evaluated the influences of season (summer vs. fall), sex (male dogs vs. female dogs), and whether the landscape was cohabited by high densities of wolves and grizzly bears. Individual LPDs were included as a random effect in all models to prevent Type I error from repeated observations of the same experimental units. We used Akaike’s Information Criterion (AIC) to evaluate and compare candidate models with the null model (Burnham and Anderson 2002). We considered the model with the lowest AIC value to be the model that best explained LPD behavior.

To evaluate the simple effects of season, sex, and cohabitation with wolves and grizzly bears, we used chi-square likelihood ratio tests to compare the null model with the respective single-variable candidate models. Significant effects were declared at P ≤ 0.05. 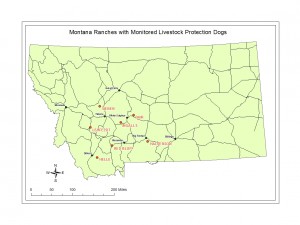 Our best model included the influence of sex and the interaction of season with time of day (see table). Table 1 Candidate models of LPD behavior The AIC value for this model was 168,259.6, whereas the AIC value for the null model (i.e., intercept-only model) was 168,464.5 (∆AIC = 204.9). Overall, roaming distance (i.e., distance between the LPD and the sheep it was protecting) averaged 198 m (0.1 mile). Female LPDs roamed 83 m (272 feet) farther from their sheep than male LPDs (P = 0.03), and roaming distance of both sexes averaged 42 m (138 feet) more during summer than fall (P = 0.04). Roaming distance did not differ between LPDs with or without high densities of co-habiting wolves and grizzly bears (P = 0.22). The significant interaction between season and time of day indicated that roaming distance of both male and female LPDs was similar at night regardless of season, whereas morning roaming distance was greater in summer than fall (see graph) Figure 2. LPD Roaming Distance. LPDs remained closer to their sheep during mid-day and roamed farther away at night, yet mean roaming distance of the 13 LPDs never exceeded 300 m (0.2 mile) during any hour of the day or night, in either summer or fall (see graph). However, the maximum roaming distance recorded of every LPD exceeded 400 m (0.25 mile). Maximum roaming distances varied widely among the 13 LPDs, ranging from 512 m to 1,994 m.

The next opportunity for using LPDs for non-lethal predator control is with rangeland cattle. Increasing levels of cattle depredation by wolves and grizzly bears in the West is spurring increased interest in LPDs among cattle producers. Predator losses have severe economic impacts on US cattle production. In Montana alone, predator losses cost the cattle industry $2.7 million annually. Wolves are the largest cause of mature cattle losses, while coyotes are the largest cause of calf losses. Currently, 35% of Montana cattle producers protect their livestock with some kind of guard animal (e.g., LPDs, donkeys, llamas, etc.). The use of LPDs by cattle producers is increasing, driven mostly by increasing predation by wolves and grizzly bears. LPD use by cattle producers is likely to expand into other western states where populations of wolves or grizzly bears are currently increasing, especially in Arizona, Idaho, New Mexico, Washington, and Wyoming.