In Alaska, the high cost of renovating pasture and hay fields and the short production season result in hay fields that remain in continuous grass hay indefinitely. Some fields have been in production without renovation for over 30 years. Fields are severely compacted causing environmental concerns, rooting depths are shallow, and surface applied fertilizer is often lost to volatilization and runoff. Nitrogen that infiltrates below the shallow root system can easily be leached into ground water in areas where water tables are shallow. Yields and profitability are negatively impacted, soil health is extremely low, and biologic activity is reduced. This project is unique in comparing three options to complete renovation of fields without the high costs of seed, fertilizer, fuel, labor, and indirect costs including loss of income during a three-year renovation. Renovation can lead to loss of customers if supplies are not adequate to supply a producer’s standing hay customers. Seasons are very short and standard field renovation including disking, plowing, and planting could take up to three years. Previous research and testing using soil aeration with an aerator was inconclusive. This SARE-funded project to utilized mechanical over seeding that slightly discs and then seeds new grass in older hay fields and also use a cover crop (forage radishes) to break up soil compaction and improve soil health. Cover crops have potential to improve soil texture and porosity in the absence of critical micro invertebrates.

This project tested the effectiveness of three different treatments to improve soil health and consequently hay production on overly-compacted hay fields in Interior Alaska. These field trials included the following treatments: (1) use an overseeder to renovate a plot and seed brome grass, (2) renovate and overseed with radish seed, and (3) broadcast radish seed. We found no significant treatment effects on forage yield, but this may be due to the short seasonal impacts of cover crops, and decreased impact due to competition with weedy species in establishing radish plots. More work should be done to assess the use of cover crops in renovating interior Alaska hay fields to improve soil health and forage production.

The overall goal of this project was to evaluate the effectiveness of non-traditional hay renovation techniques, and the subsequent effect on hay yield, soil quality and weed stand presence. These were evaluated using the following objectives: 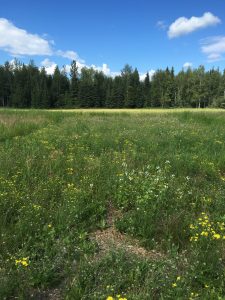 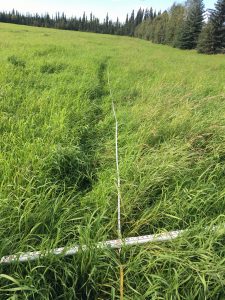 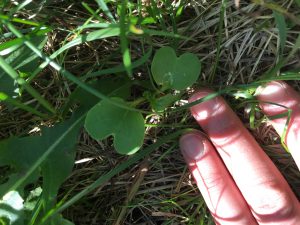 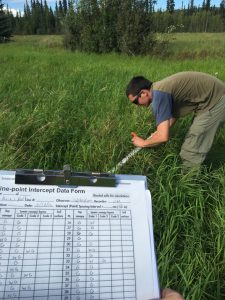 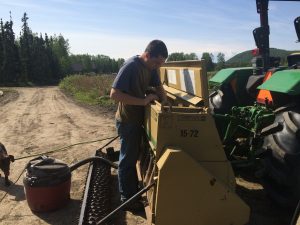 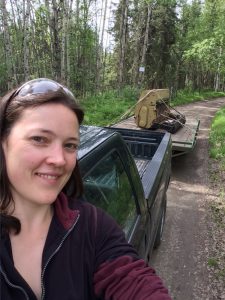 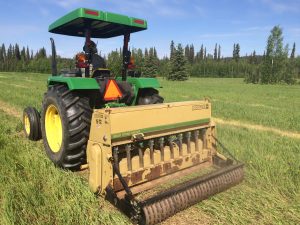 To assess the effects of various hay field renovations, 5 treatments were established in a randomized complete block design at 3 locations. These 5 treatments included:

The treatments are summarized in the following table:

With assistance from the farmers, tillage radishes and brome were overseeded in the relevant plots each year. The overseeder was thoroughly cleaned with a power-washer to prevent the spread of weeds between farms. FSWCD provided oversight of plot fertilization to ensure that it was completely correctly at an appropriate rate each year.

In August of 2016 and 2017, point intercept forage sampling, soil infiltration measurements, forage rings, and forage quality sampling was completed in each plot. The following text describes each in slightly more detail.

In early July 2016, plots were checked at Davies Farm and invasive weeds were outcompeting some of the forage plots. The decision was made to mow all plots, excluding the overseed radish plots, for purposes of weed control. For this reason, forage sample collection was not completed in 2016 at this farm.

Germination rates of radishes were quite variable between farms. We estimated from sample plots that there were 13,125 radishes per acre for both Jenny M Farms and Davies Farm. Wild Iris Ranch had a much lower germination rate, at 3,281 radishes per acre. This could have been due to soil or other environmental conditions, such as low soil moisture.

A two-way ANOVA with treatment and block as fixed effects revealed that none of the treatments had a significant effect on biomass of hay or weedy species on Jenny M Farm. On Tomsha’s farm there was a significant effect of block on the biomass of brome and weedy species. This result is consistent with the observation that one of the three blocks had very different soil characteristics and vegetation cover compared to the other two blocks.

We found no significant effects of soil quality, forage quality, or soil infiltration. While these hold true for the 3-year assessment, these tests may prove significant if the study was converted to a long term study, with multiple years of cover crop treatment, rather than just one or two years.

Although we could not detect any treatment effects on yield (biomass) of forage species, we have gleaned some very useful information from this study. Some of the observations we have made include:

It should be noted that these observations are based on our experiences at 3 local farms and might not hold true if the experiment was repeated at other farms with different environmental factors. Furthermore, the study time was 3 years, which may not have been long enough to discern measurable impacts of the effects of cover crops on soil health and consequently hay field productivity.

In late winter of 2016, FSWCD completed the farmer survey about hay farming methods. Approximately a dozen local farmers were given a phone call to participate in the survey. Six farmers completed the survey. It should be noted that there are a limited number of hay farmers in Interior Alaska, so this is actually a fairly representative sample size. Farmers were asked questions about their farming methods and field renovation practices. Many had questions about conservation planning, soil testing, nutrient management, weed control, and other related subjects that we were able to assist them with. The farmers, on average, have had their hay fields in production for 21 years with no renovation. All of the farmers contacted were interested in renovating their fields but were hesitant to due to lack of information and the economic burden of renovating.

In the winter of 2018, many follow-up assessments with local interested farmers discussing the results of the Interior Alaska Hay Field Renovation project occurred. Most farmers were still interested in various aspects of overseeding for hay field renovation, but they were most interested in features of renovating hay fields with cover crops following the use of herbicides. We did note that the broadcast radish treatment, which included herbicide application prior to the seeding of radish had the highest germination, survival and growth rates of all the treatments.

Personal contacts were made with local farmers through the farmer survey and at various outreach events. Displays were showcased at local events including the Alaska SARE Conference, the Alaska Farm Bureau Meeting, the Tanana Valley State Fair and the Alaska State Fair. A workshop was held in cooperation with the UAF Large Animal Research Station to inform local growers about the project. Various outreach updates were given through Facebook posts and FSWCD newsletters. A final newsletter report, as well as updates via social media, will be given through the summer of 2018.

Through both word-of-mouth and through outreach activities, local farmers have learned about this project and have also learned about conservation practices that can be implemented on their own farms. These include practices of cover cropping, the use of an over-seeder, soil conservation techniques, and weed management.

The participating farmers, particularly Mr. Tomsha, Mr. Scharfenberg, and Mr. Davies, have contributed a large amount of time and resources during their already-busy summer to assist with the implementation of this study! Their efforts have been absolutely essential to the completion of necessary project work.

While we did not see conclusive or significant effects between treatments, we did notice trends of increased water infiltration following some overseeded radish plots. This can greatly reduce runoff as well as the volatilization of nitrogen. Rooting depth as well as organic matter sequestration will also be enhanced with increased soil health.

Given adequate time with cover crop integration into a hay renovation scheme, farmers can expect increased production and profitability. This is turn can promote local sustainable agriculture throughout Alaska by promoting locally grown forages. We did not directly assess the social benefits of this project, but anecdotally many farmers are highly interested in sustainable renovation techniques.