The cornerstone of a sustainable plant disease control program for any farm community hinges on well-trained agricultural professionals. Diagnosing diseases in Guam and the Northern Mariana Islands is a constant challenge because of the yearly movement of nearly 2 million tourists and the importation of large quantities of fresh produce. Compounding the problem is the islands’ remoteness from mainstream plant pathology research and teaching facilities. Project’s long-term goals are to increase economic viability and enhance environmental quality of small commercial and subsistence farming operations in the region through accurate and timely diagnoses of plant diseases. The project’s immediate goal is to provide agricultural professionals with the skills and knowledge useful in discerning leaf spots caused by fungi as opposed to those caused by bacteria or chemical sprays.  Trainees will be provided with the skills necessary to differentiate among similar and often confused symptoms caused by three common and virulent fungal genera: Colletotrichum, Cercospora, and Corynespora. Using trainers from Georgia and the Philippines, will bring a national and  an international perspective to the workshop. Travel cost for the trainers will be kept to a minimum by scheduling the workshop to coincide with their other travel plans. Activities include: 1) Guam assembling workshop materials; 2) Guam collecting images of field symptoms and micrographs of spores from 15 foliar fungi including Colletotrichum, Cercospora, and Corynespora; 3) Guam preparing single spore isolates; 4) Georgia identifying isolates and depositing sequences to GenBank; 5) Guam updating Guam’s Index of Plant Diseases; 6) Guam, Georgia and Philippines conducting a four-day plant disease diagnostic workshop for 12 trainees composed of field trips, lectures, hands-on examination of samples, laboratory exercises, and engagement opportunities with the local farmers and the public; and 7) Guam, Georgia and Philippines posting identification tutorial online; and 8) Georgia and Guam conducting a workshop evaluation.

Objective 1) Increase the technical capacity of the University of Guam to train agricultural professionals about foliar fungal leaf spots through the assembly and development of training materials.

Objective 2) Increase diagnostic collaboration between the Universities of Guam, Georgia, and the Philippines by identifying unknown species of Colletotrichum, Cercospora, and Corynespora and other fungal leaf spots that occur on Guam and enter such information into the Guam Index of Plant Diseases and other databases.

Objective 3) Increase the skills of agricultural professionals in Guam and the Northern Mariana Islands to diagnose fungal leaf spots and to be able to pass this information on to their constituents, through the production of a diagnostic workshop composed of field trips, lectures, and microscopic examination of plant samples.

Objective 4) Use workshop evaluations consisting of surveys and pre and post-tests to measure knowledge gained and identify opportunities for future plant pathology related activities and the means through which delivery of diagnostic skills and knowledge to trainees or stakeholders in future workshops can be improved.

Proposal’s principle assumption is the belief that improvements in the skills of agricultural professionals in discerning various fungal leaf spots will translate into more specific and targeted recommendations to their clientele.

Inputs include expert workshop trainers (Dr. Schlub, Dr. Kemerait, Dr. Brewer, and Dr. Sumabat-Dacones); a mycologist with expertise in molecular techniques (Brewer et al., 2014; Stewart et al., 2015; Sumabat et al., 2018); and a Co-PI with expertise in instructional evaluations. Direct financial contributions will come from WSARE, while salary support will come from the PI, Co-PI, and trainees’ respective institutions and governments. Farmer volunteers will host field trips and participate in a half-day clinic for growers and the public.

The workshop will follow the “Train the Trainer” model and will include classroom and field instructions. On the final day, trainees will have an opportunity to use their newly acquired knowledge during a half-day clinic for growers and the public.  Dr. Shelton will use the Don Dillman’s tailored Design method (Dillman et al. 2014) to formulate survey questions and the IBM SPSS Statistics software (IBM 2017) in data analysis.

Activity 2: September 2020-January 2022: Guam will collect images of field symptoms and micrographs of spores of 15 foliar fungi including species of Colletotrichum, Cercospora, and Corynespora.

Activity 3:  September 2020-January 2022: Two sets of 15 single spore fungal isolates will be prepared. One will be sent to Georgia for ID the other maintained on Guam.

Activity 4: January 2021-August 2021: Trainers will develop a tutorial on distinguishing foliar infections caused by Colletotrichum, Cercospora, Corynespora, and other fungi. A working model will be available at the time of the workshop for trainees’ testing and feedback. When finished the tutorial will be placed online.

Activity 5: March 2021: Trainers will conduct a four-day plant disease diagnostic workshop, composed of field trips, lectures, and microscopic examination of samples. There will be 4 trainers and 12 trainees consisting of seven from Guam and four from Northern Mariana Islands.

Activity 6: May 2021-January 2022 Guam and Georgia will provide a written evaluation of the workshop and pre and post-tests, along with solicited suggestions from trainees for future workshops.

No educational approach has been used during this initial five-month reporting period.

No educational and outreach initiatives has occurred during this initial five-month reporting period.

No learning and action outcomes has occurred during this initial five-month reporting period.

A training manual for identifying leaf spot diseases is being crafted. This manual consists of fact sheets developed using pictures of leaf spots recently gathered for this grant. The fact sheets include the name of the pathogen, condia morphology including microscope digital photos of the condia taken in our lab, leaf spot photos using a camera and microscope, a description of the disease development on Guam, and a description of the symptoms. Also, a simplified key with other information is being developed to compliment the fact sheets.

We collected 25 leaf samples from plants around Guam between the months of November and December 2020. A google drive account was created to share sample data in real time with the University of Georgia.  The majority of leaf samples collected were of economically important crops but some leaves displaying pathogen symptoms were collected on ornamentals and native plants. Locations included farms in Northern Guam, the University of Guam campus, the tourism district, and coastal areas. Date and GPS location of each leaf sample was recorded and cataloged in our plant clinic log book.

Objective 1) Increase the technical capacity of the University of Guam to train agricultural professionals about foliar fungal leaf spots through the assembly and development of training materials.

Assembly and development of training materials:

(1) Photographic key of fungal leaf spot symptoms caused by Colletotrichum, Cercospora, and Corynespora and other fungi.

A list of Guam foliar pathogen genera was compiled, each was rated for incidence on Guam (common, occasional, rare), importance to Guam’s economy (high, moderate, low), and frequency reported in Guam’s Disease Index.  Eighty-nine pathogens were identified. From this list of pathogens approximately 15 will be chosen for the photographic key (fact sheets). A draft copy of a fact sheet follows: 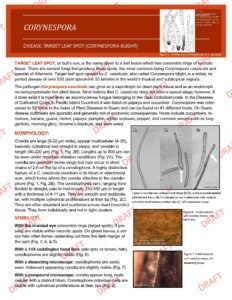 A list of Guam foliar pathogen genera was compiled, each was rated for incidence on Guam (common, occasional, rare), importance to Guam’s economy (high, moderate, low), and frequency reported in Guam’s Disease Index.  Eighty-nine pathogens were identified. From this list pathogens approximately 30 will be chosen for inclusion in the simplified key. Three outlines of the simplified key have been evaluated.

Objective 2) Increase diagnostic collaboration between the Universities of Guam, Georgia, and the Philippines by identifying unknown species of Colletotrichum, Cercospora, and Corynespora and other fungal leaf spots that occur on Guam and enter such information into the Guam Index of Plant Diseases and other databases.

We collected 25 leaf samples from plants around Guam between the months of November and December 2020 (Table 1).

Field symptoms and microscopic images were photographed (Figure 1, 2, 3,). Leica MZ95 dissecting scope was used for the photomicrographs. If spores were found they were scraped off the leaf sample and wet mounted on a glass microscope slide and examined under a Leica DM1000 compound light microscope. 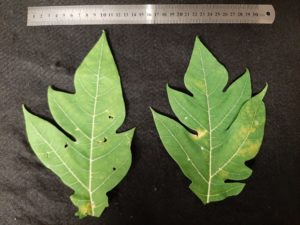 Duplicates of each leaf sample were dried over two-day periods and pressed between cardboard sheets for later use in PDP training (Figure 4). 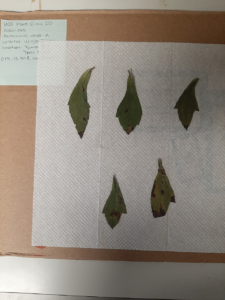 Figure 4: Examples of duplicate samples dried on herbarium sheets for future use in diagnostic educational workshops.

To assist in morphological identification of leaf fungal pathogens, help from the lab of Dr. Marin Brewer at the University of Georgia was utilized. Ultimately the University of Georgia will identify these samples molecularly. Leaf samples were sent on the same day of field collection to UGA from Guam. After receiving samples, graduate student Manuela Samaco assessed the condition upon arrival, took photographs, and attempted to identify presence or absence of spores. If spores were found photographs were taken using a light and dissecting scope. Samaco attempted to get subsets of each sample into tissue culture, some were successful. Some samples had spores observed while others did not. Spores were later observed on 11 out of 25 samples by UG after arrival. Possible identities were listed by mycologists at UGA based on leaf spot symptoms and spore morphology (Table 2).

Table 2: Collection dates and other information