In my application, I proposed to use soil health samples to tell me what the soil needed in graze-able cover crops to improve it.  Then the soil would be healthier, the cover crops would be healthy so the goats would gain weight by grazing them. I would like to show that graze-able cover crops planted for high stress seasons such as late winter and late summer could save the producer time and money. If the goats can graze or harvest their own feed instead of eating hay and grain during those times perhaps they will gain enough weight to be considered a "finished carcass".  I feel like this is possible and it would help the producer due to the timing.  The Easter market is usually when many goats are sold as well as Fall, close to the Thanksgiving Holiday.  If producers could finish their goats on cover crops this would allow for a "grass finished animal" using less hay and grain.

Due to weather conditions in West Central Missouri in 2015, this project did suffer from too much rain for first planting and not enough rain for the second planting of cover crops. Changing weather patterns can be difficult to navigate when a time line has been scheduled.  The first planting was in July. With no way to get a drill over the ground, the seed was broadcast using an EarthWay seeder.  The test plots are 50 ft x 50 ft. The stand of cover crops was uneven but there was enough to measure and graze.  In October, a winter cover crop was chosen and dusted into the test plots with the use of a grass drill because it was so dry.  The plan was to graze the goats on the cover crops by the end of February, 2016. Due to very little rainfall or snow during October 2015 to February 2016 we are still waiting on cover crops to be tall enough to graze.  Soil health analysis played an important role in seed selection, which I will talk about in the Objectives section.

The soil samples suggested that the soil at the three farms was very different from each other. The cover crops were chosen to try to correct the issues in the soil and yet be a graze-able crop for the goats to harvest. I used SARE Handbook #9: Managing Cover Crops Profitably, pp 62-72, as my guide and I had some assistance from my cover crop vendor to tweak the cocktail of seeds to each soil sample.  Seed selection was based on correcting soil first, then it must be a good variety for grazing if possible.  If the vendor had two varieties that would assist in mineralizing nitrogen and build carbon, such as a legume like cowpeas, then I selected the variety which would be most leafy.  The second soil sample (see attached soil health analysis results) was taken the same day that we planted the second cover crop cocktail.

The weather was against us again in October (suggested cover crop planting time for Mid Missouri is September 15 to October 15) as there had been no rain, so we "dusted in" the seeds with the grass drill and hoped to be able to graze around the end of February. As of this writing we still have not grazed the second planting. The cover crops for the second planting were selected to basically be the winterized version of the first planting. Since we waited on rain and did not get it the soil health samples are truly a salute to what cover crops can do for the soil when you compare the two.  The soil health lab sent an email asking what had we done to get such improved results on the same test plots in such a short time. Two of the plots were fescue and clover and the third was vegetables and weeds before the project. The goats were on the plots for four days and would have dropped manure on the soil during that period. Manure may have contributed to a bit of the improvement but in my opinion the cover crop was most beneficial.

I asked the producers to select goats which would remain on the farm for the two years of the grant. They all selected young animals, 3-7 months old.  In doing so, we had inexperienced grazers, newly weaned kids, and kids that had been raised by humans instead of their own mother.

Here is part of the challenge; not all goats are created equal in the grazing department.  Browsing is understood by most goats no matter the age but grazing is another issue.  Browsing is about selecting something that is slightly out of reach which makes the food source mysterious and goats are very likely to try for the challenge, goats enjoy high tannin foods like tree leaves.  When it comes to grazing they need to be taught about the food and their mothers or older herdmates will graze side-by-side with them so they learn what tastes best at what time of day. See Dr. Darrell Emmick's work on novel foods: https://learn.extension.org/events/1226.

Based on Emmick's research the weight lost by some of the goats is to be expected but still disappointing.  The Hallars' goats gained weight on both the mixed grass plot and the cover crop plot.  Their goats are used to traveling over 20 acres to select their own food in a herd of about 100.  Penning the kids allowed them to select food without walking so far and with less competition. The kids at Drumm Farm were pen raised without the benefit of their mothers being present after they were weaned from bottles.  All their food had been in feeders in dirt floor pens. When they were placed in the cover crop plot the plants were six to thirty-six inches tall.  The kids could not see their herdmates and were unfamiliar with the arrangement which made them nervous.  The kids at Stark/Williams Farm (Also known as Lynnewood Farm) were used to grazing as a herd but did not like being in the pens when they could see the rest of the herd walking around and resting in the shed that they could not go to.  They fretted and escaped and had to be put back several times during the four days. This was too much stress.

Even though the data looks bad and the weights are not very convincing of a good outcome, I think that as the animals get older they will realize that being in the pen is not so bad because the food is better. So I hope to see better weights during the rest of the project. 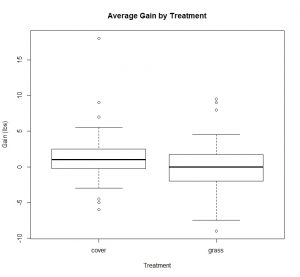 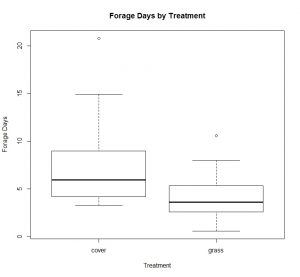