2. Identify if there are differences in parasite prevalence of pea crabs and mud blister worms in bay scallops housed in surface cages versus bottom cages during the year two grow-out phase, and if the use of Netminder further reduces prevalence. (Year two grow-out Experiment)

Interactions among species within communities vary, resulting in outcomes that can benefit either, neither, or both of the species involved (Poulin, 2007; Krasnov et al., 2010). The scenario where one species benefits and the other suffers as consequence of the interaction is known as parasitism (Criscione and Blouin, 2004; Poulin, 2007; Rabajante et al., 2015; Wood et al., 2018). Parasites are estimated to comprise a large percentage of the organisms on the planet (Poulin, 1997; Dove and Cribb, 2006; Dobson et al., 2008); by some estimates over 6 million parasitic species, or 40 percent of earth’s biodiversity (Dobson et al., 2008; Krasnov et al. 2008). However, for many of the parasites species that have already been described, knowledge of their interactions and impacts on their hosts is still limited (Bordes and Morand, 2009).

Host-parasite interactions are complex, and vary between different parasite and host species (Bordes and Morand, 2009). The parasite usually utilizes the host for shelter, survival and reproduction by obtaining energy either directly or indirectly from the host (de Roode et al., 2008). The benefits which the parasite gains from infecting the host comes at a cost to the host’s health, and the degree to which the parasite affects its host is known as virulence (Frank, 1996). The parasite needs the infected host to stay alive long enough to ensure transmission to a new host or long enough to ensure its own successful reproduction (Dove and Cribb, 2006; Paterson and Piertney, 2011). The infected host usually tries to fight off the parasite, either physiologically via the host’s innate or adaptive immune systems (Ellis, 2001; Lemaitre and Hoffmann, 2007; Quintin et al., 2014), or mechanically and behaviorally (Hart, 1990; Woodman and Fernandes, 1991; Moller and Rozsa, 2005; Schaller, 2006), coming at an energetic cost to the host (Zuk and Stoehr, 2002; Daly and Johnson, 2011). Furthermore, the effects of parasites are felt well beyond their immediate hosts.  Parasites, and their interactions with hosts, are major drivers of biological, ecological and evolutionary processes, shaping the environments and ecosystems that they inhabit (Wild et al., 2009; Paterson and Piertney, 2011; Lange et al., 2014).

Alterations to ecosystem functions caused by host-parasite interactions can have costly economic implications on valuable human resources, such as agriculture and aquaculture crops (Rubiales et al., 2009; Hamelin et al., 2011; Paterson and Piertney, 2011). For example, the parasitic dodder plant of the genus Cuscuta infects many crops species globally, and has been implicated in 80-100% losses in yield of infected cranberry crops (Vaccinium macrocarpon) in Massachusetts (Tjiurutue et al., 2016; Ghantous and Sandler, 2017; Krause et al., 2017). In salmon farming, infections by salmon lice (Lepeophtheirus salmonis) can have serious economic impacts (Torrissen et al., 2013; Abolofia et al., 2017), and had an estimated global impact of US$480 million globally in 2006 (Costello, 2009). Increasing our understanding of the complexities of host-parasite interactions in global agriculture and aquaculture crops will help promote their persistence as a source of revenue, jobs, and food for the world’s continuously growing demand for food resources (Brown and Tellier, 2011; Torrisen et al., 2013).

The bay scallop is a species of shellfish which was once commonly found along the northeastern coast of North America, occupying shallow depths, ranging from intertidal areas to depths rarely exceeding 12 m (Shumway and Parsons, 2006; Mackenzie, 2008a; Mackenzie 2008b). Bay scallops are filter feeders, making them ecologically important by reducing coastal turbidity (Mackenzie, 2008a; Mackenzie 2008b) and eutrophication via the conversion of algae, which consume excess nutrients in the water column, into shellfish biomass (Barber and Davis, 1997; Shumway and Parsons, 2006). In addition to being ecologically important, the bay scallop is also economically important, and once supported a very successful wild fishery that collapsed in the 1980’s due to habitat loss and overfishing (Barber and Davis, 1997; Blake and Shumway, 2006; Mackenzie, 2008a). Town, State, and Federal agencies are currently investing in efforts to restore wild populations, while also funding research focused on optimal methods for bay scallop aquaculture (Arnold et al., 2005; Mackenzie, 2008b; Tettelbach and Smith, 2009).

Shellfish, such as bay scallops, in both natural and cultivated populations, can be infected by multiple parasites at the same time (Dinamani, 1986; Whyte et al., 1994). The timing of when a parasite infects its host typically varies depending on the lifecycle of either the host, the parasite, or both (Crosby and Roberts, 1990; Gilbert and Granath Jr., 2003). Macroparasites, such as Mud blister worms and pea crabs can infect shellfish during their larval, post-larval, and adult phases (Kruczynski, 1973; Derby and Atema, 1980; Bierbaum and Farson, 1985; Kane and Farley, 2006; Morse et al., 2015). The timing of the different life stages of pea crabs and mud blister worms are influenced by environmental factors such as water temperature (Costlow and Bookhout, 1966; Blake, 1969; Morse et al., 2015).

Many macroparasites of shellfish, such as parasitic crabs, polychaete worms, and nematodes have a free-swimming larval stage, allowing the parasites to reach potential hosts before adulthood, when they may be less mobile within the water column (Derby and Atema, 1980; Marcogliese, 1996; Mortensen et al., 2000; Radashevsky, 2005). When cultivating bay scallops and other shellfish species, identifying strategies that allow for the avoidance or mitigation of parasite larvae, such as pea crabs and mud blister worms, can be an important factor in promoting the health and growth the shellfish (Braithwaite et al., 2007; Guenther et al., 2011; Fitridge et al., 2012).

In December of 2017, a population of bay scallops from Ward Aquafarms, LLC, North Falmouth, MA were confirmed naïve of pea crabs and mud blister worms by destructively sampling sixty bay scallops from a floating downweller system (Figure 1). Once naivety was confirmed, bay scallops from the naïve stock were placed into 18 mm mesh bags at a density of 20 scallops per bag (Figure 2). The bags were then placed in commercial aquaculture bottom cages, and deployed in Megansett Harbor, MA in December, 2017 (Figure 3). Each month, from December 2017 through June 2018, one cage was retrieved, and ten bay scallops from three of the six bags were subsampled for a total of 30 bay scallops. The bay scallops were measured for shell height and dried meat weight to assess condition index, which is the ratio of shell height to meat weight, which serves as a proxy for host health (Shriver et al., 2002). If gonads were present, they were weighed separate from the dried meat. This allows for assessment of the bay scallop’s gonadal somatic index, which is a measure of fecundity, and is the relationship of reproductive organ weight to overall host meat weight and shell height (Bologna and Heck Jr., 2000). Each bay scallop was also assessed for the presence or absence of both pea crabs and mud blister worms. 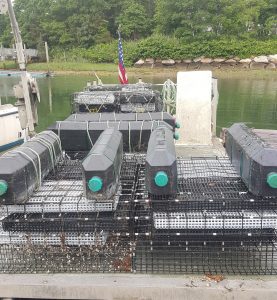 Figure 4. Objective two gear prior to deployment in June, 2018 in Megansett Harbor, MA.

Beginning in June of 2018, bay scallops from the same population used in the overwintering phase of the experiment were obtained from the downweller system at Ward Aquafarms, LLC were destructively sampled to confirm naivety for pea crab and mud blister worms. Bay scallops were stocked at a density of twenty scallops per bag. The 18 mm mesh bags were then stocked into commercial floating and bottom culture cages, which housed six bags each. The gear was deployed in Megansett Harbor, MA in June, 2018. Gear was also equipped with temperature loggers to track the influence of temperature on infection timing. 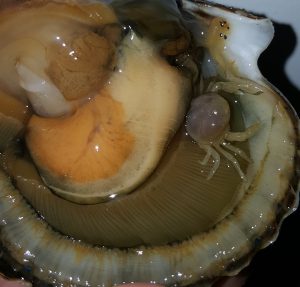 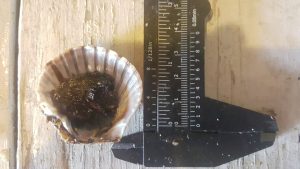 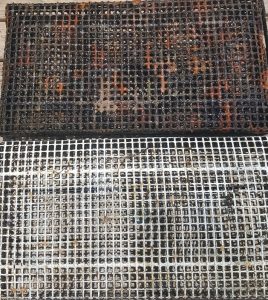 As before, each month, beginning in July, 2018 through September, 2018, one surface cage and one bottom cage was retrieved. Ten bay scallops from three bags housed in each gear type were subsampled. Bay scallops in the subsample were measured for shell height, and then shucked to assess parasite presence/absence of pea crabs (Figure 5) and mud blister worms (Figure 6), and the coinciding condition index and gonadal somatic index of the sampled bay scallop. Parasite presence/absence was recorded to track parasite progression, and condition and gonadal somatic indexes were used assess effect of the parasite on the host, and whether one reduced host health to promote infection of a second parasite. Additionally, Netminder treated and non-Netminder treated bags (Figure 7) were weighed upon retrieval and then cleaned of bio-fouling, and reweighed once cleaned. This was done to asses Netminder’s efficacy at reducing bio-fouling load on deployed gear during the second stage of the experiment.

During the sampling period of January, 2018 through June, 2018, none of the bay scallops sampled were infected with mud blister worms or pea crabs. Additionally, no significant differences (ANOVA, α=0.05, two-tailed P-value > 0.05) were seen in condition indices between bay scallops housed in Netminder treated versus non-Netminder treated gear. These results indicate that mud blister worms are not actively infecting new hosts during the months of January through June. 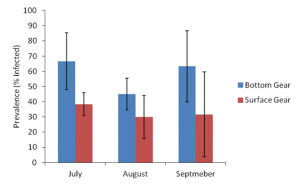 Figure 8. Mud blister worm prevalence (% of bay scallops sampled that were infected with mud blister worms) for sampling months of July, August, and September of 2018. 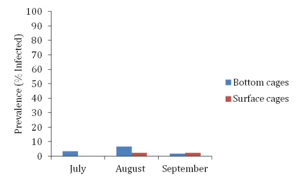 Figure 9. Pea crab prevalence (% infected) in bay scallops housed in both bottom and surface cages during sampling months of July, August and September of 2018.

Pea crab prevalence was extremely low in both gear types for the sampling months of July through September (Figure 9). Additionally, given such a small prevalence of pea crabs, no significant differences in pea crab prevalence were observed between bay scallops housed in bottom cages versus those housed in surface cages (ANOVA, α=0.05, two-tailed P-value > 0.05). Due limited data, conclusions as to impact of pea crabs on host bay scallop fitness and differences in susceptibility based on host bay scallop position in the water column cannot be inferred. 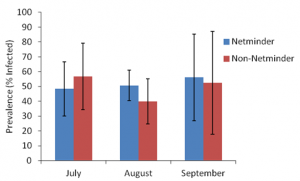 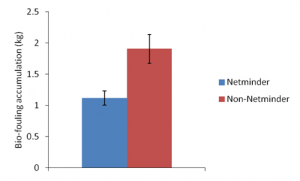 Results from this study indicate that mud blister worms are not a threat to bay scallops until July, when water temperatures increases above 20 degrees Celsius. This suggests that farmers do not need to worry about mud blister worm infection until summer months. However, the results suggest that their prevalence may be reduced if surface gear is used. However, surface gear may not be an option in cold, winter months due to increased wind and wave activity, as well as potential freezing. Given that cooler months (i.e., winter months) minimal mud blister worm prevalence in bottom gear, bottom gear may be a viable option to avoid gear damage and loss associated with surface gear, while still minimizing mud blister worm prevalence threats. With mud blister worms significantly reducing host bay scallop fitness, it is important to consider strategies to avoid their prevalence as much as possible. In regards to pea crab mitigation strategies, further research will be needed, for prevalence in the summer of 2018 was too low for any conclusions to be drawn.

Netminder proved to be unsuccessful at reducing mud blister worm prevalence. However, if a farming operation wishes to reduce costs associated with cleaning gear, results suggest that Netminder may be a good option.

Results from this study will help enhance the viability of bay scallop aquaculture in the northeastern United States by outlining potential strategies to increase the health of aquacultured bay scallops.

Results from this study increased both my knowledge of parasite mitigation strategies in bay scallop aquaculture, as well as the natural history of mud blister worms on Cape Cod. Furthermore, this study led to further research investigating the impacts of temperature on pea crab infection success in host bay scallops in laboratory controlled experiment.

Proposed methods were carried out, and most of the desired information to be gained from the study was obtained. However, given the low prevalence of pea crabs in the year of 2018, further research may need to be done to determine when they infect host bay scallops. This will outline when pea crabs become a threat in bay scallop aquaculture, as well any ways to potentially mitigate pea crab prevalence.