44,000 family forests cover 3.3 million acres in Oregon and Washington; 74% “have good stewardship attitudes but are not highly engaged in managing their land” [1]. Social science research identifies shortfalls and calls for experimentation with modern technology and marketing to better engage landowners [2]–[5]. Preparing a Forest Management Plan (FMP) may involve days-to-months navigating dozens of websites, learning software, or visiting offices, and remains a challenging prerequisite for cost-share or incentive programs or to justify investments in forest management or acquisition decisions. Mapping and characterizing a property’s forest stands remains a particularly costly and time-consuming bottleneck.

Our motivating research questions are:

Following best practices to coproduce actionable science, our team will involve stakeholders and end-users (landowners and foresters) throughout the project, including qualitative research to define user needs and requirements, assessing models that estimate forest conditions, honing tools deemed suitable for broader use, and delivering them with web technologies and extension activities.

We will engage stakeholders who develop and review FMPs to ensure our deliverables comply with relevant formatting and data sufficiency requirements. Producer Advisors will participate in qualitative research including interviews with forest owners and managers in Oregon and Washington to clearly define User Needs, Use Cases, and Functional Requirements for new tools and technologies. We will then train, document, and publish open-source machine learning models using hundreds-of-thousands of plots and stand-delineations from public agencies across Oregon and Washington, apply them to generate predictive maps of basic forest conditions, and refine our models following forester and landowner feedback and ground-truthing. Based on our research, we will integrate new features/products into existing open-source web apps to serve maps and tabular data that auto-populate relevant sections of a FMP template.

Our work will lead to the following outcomes:

This project is organized around five objectives:

3.1 - a) lidar and imagery datasets processed across OR & WA; b) data processing pipeline migrated to Azure, documented and published on GitHub

Our motivating research questions are:

Our related hypotheses are:

Through public records requests from several State and Federal agencies with forests in Oregon and Washington, we have acquired plot-based and stand-based datasets representing all the forested ecoregions across Oregon and Washington. The forest observation data have been processed and organized to support easy loading along with corresponding remotely-sensed and other datasets including lidar point clouds, aerial and satellite imagery, elevation and terrain-derived attributes, disturbances detected from historical satellite imagery, and down-scaled climatic attributes.

Data have been organized into hierarchical folder structures and text files that provide quick access to the various data layers accessible for each plot- or stand-based set of forest measurements.

As of March 2021, these data have been utilized to train a variety of models for plot-level and stand-level tasks. We trained linear and Machine Learning (ML) models to predict percent canopy cover, average tree diameter, dominant tree height, cubic volume per acre using both lidar- and satellite-derived features. To estimate the presence and abundance of tree species, we utilized the Random Forests algorithm adapted to perform ordinal classification for the abundance tree species groups (e.g., firs, spruces, pines, cedars, oaks, etc.) as absent, present, abundant, or dominant using satellite imagery. We also trained a model to predictive the relative abundance of hardwood versus softwood species from satellite imagery.

To support the application of these predictive models, we developed data-fetching functions which collect the relevant input data from free and publicly-accessible data sources including Google Earth Engine (SENTINEL-2 satellite imagery) and The National Map (Digital Elevation Model).  These functions gather these data for areas defined by a bounding box and return the data formatted for immediate use by a predictive model.

To date, we have trained a variety of forest structure and species composition predictive models. For the structure models, we have developed both lidar-based and satellite-based models to predict canopy cover, dominant tree height, quadratic mean diameter, and total cubic volume at the scale of a 10m-by-10m pixel. Measurements of field plots installed by state and federal agencies across Oregon and Washington where coinciding lidar and satellite imagery have been gathered are used to train predictive models (a total of 3,594 and 3,985 unique plots coincide with available lidar and satellite imagery, respectively).  From the year of field measurement, these plots have been grown forward using the Forest Vegetation Simulator growth-and-yield model on an annual timestep. When the plot data (measured or grown-forward) corresponds with available lidar or satellite data, the plot is included in the dataset used for model training and evaluation. The following table displays how many observations among these plots are available from each year of lidar and/or satellite data acquisitions.

We adopt a nested cross-validation approach to estimate the performance of the various models/algorithms while also allowing the hyperparameters of each model to be tuned. This allows us to estimate the predictive performance of each model type on held-out data when it has been tuned to achieve the lowest predictive errors. This approach is illustrated in the following figure. 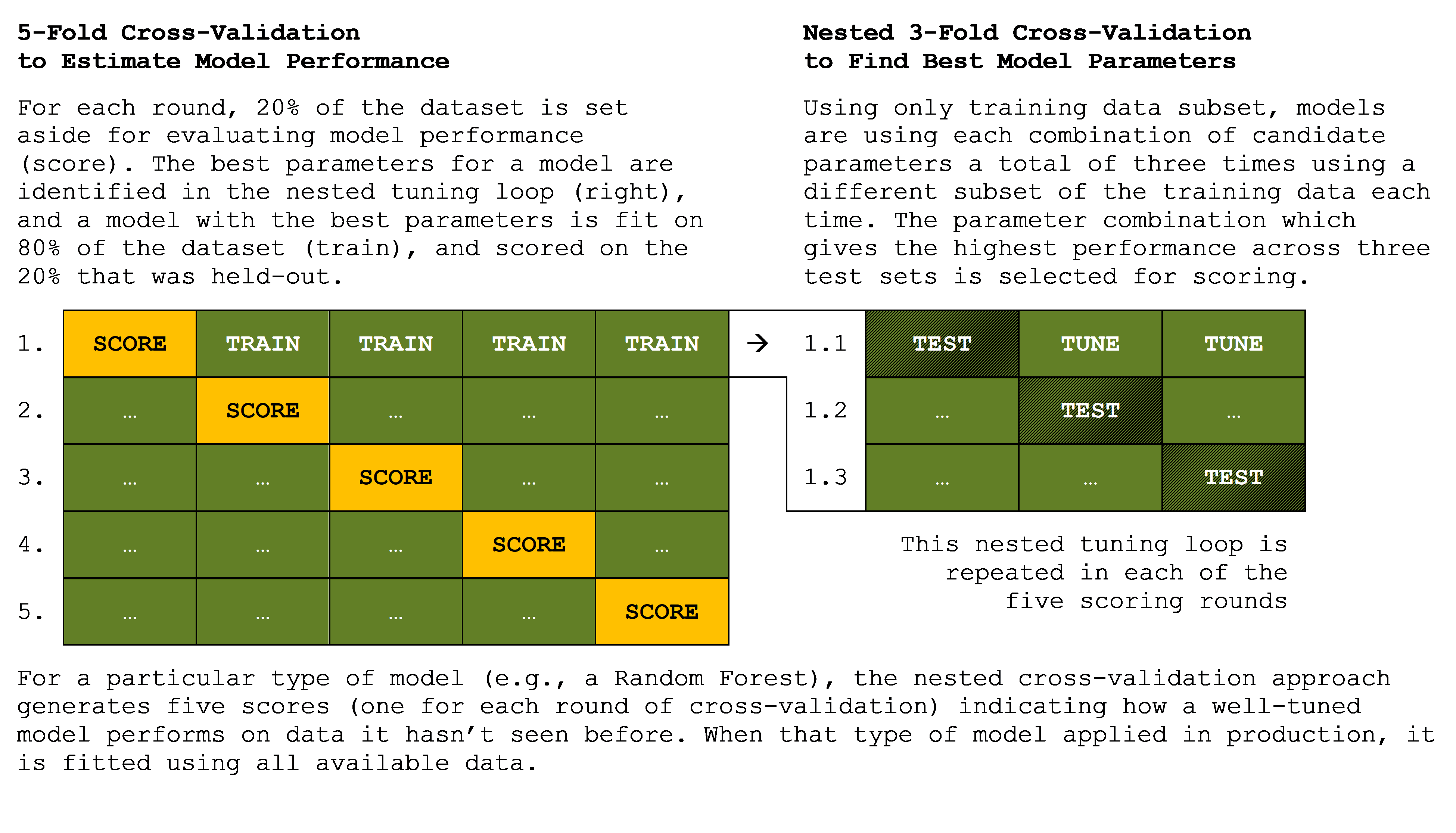 We also implemented a workflow to automate the segmentation of forest stands from aerial imagery following the Size-Constrained Region Merging approach described by Castilla et al. (2008). This approach applies a series involving downsampling imagery (if necessary) to 10-meter resolution, followed by a de-noising filter, and a gradient (Sobel) filter to produce an image depicting how spectral values change over space. The gradient image is oversegmented from seeds placed in local gradient minima using the watershed segmentation approach. The "superpixels" produced by oversegmentation are approximately 1/10-acre in size. A graph is constructed which encodes the adjacency of superpixels and the spectral "distance" between the pixels. A region-merging algorithm is then applied which successively merges adjacent superpixels while honoring constraints including a minimum mappable area for stands, and approaching a mean polygon area.

Although the plot-level training data from state and federal agencies provide an excellent basis for the Project Team to evaluate the precision and uncertainty of forest type predictions across Pacific Northwest ecoregions, the development of property-scale maps for use in Stewardship and Forest Management Plans also necessitates that the maps we produce are judged as credible and practical by foresters and landowners. Over the course of this project, the acceptability of the Forest Type maps we generate will be evaluated in collaboration with participating landowners as part of beta-testing. The beta-testing will be structured so that participants can access maps of predicted forest attributes for an area of their choosing (within Oregon and Washington) and provide open-ended responses as well as specific survey questions.  With the debut of the Landmapper web app in December 2020, the Project Team gathered similar feedback regarding other maps (topographic, soil, stream) and tables through a webinar and online survey which helped identify a variety of bug-fixes and updates to the user interface and underlying data we provide.

To inform better understanding of the diverse needs and and potential use cases for forest landowners and managers for new stewardship planning tools and technologies in the Pacific Northwest, we convened a team to conduct User Research through a series of interviews and qualitative analysis.

Following a 2-day training with two academic social scientists with expertise in natural resource social science and user research, several Project Team members collaborated to produce a User Research Protocol. This 18-pp document describes the sampling approach, generic interview template, and data handling and processing methods. The User Research Protocol (along with the Co-Production Assessment Plan) were reviewed and updated with the guidance of the Advisory Team in December 2020. Five Project Team members (Jones, Braybrook, Brown, Loreno, Cowherd) who participated in the User Research workshop formed an Interview Team and are conducting the interviews in pairs.

A generic interview template is used to guide 60-minute semi-structured interviews on topics related to motivation for forest stewardship, challenges involved with gathering information and making decisions, and the experiences and attitudes landowners have had with existing people, organizations, and technologies involved in forest stewardship planning and implementation. These interviews are being recorded and transcribed. By March 2021, interviews had been conducted with all (8) members of the Advisory Team.  By the end of 2021, we expect to have completed a minimum of 22 total interviews sampling from several target audiences as shown in the table below. 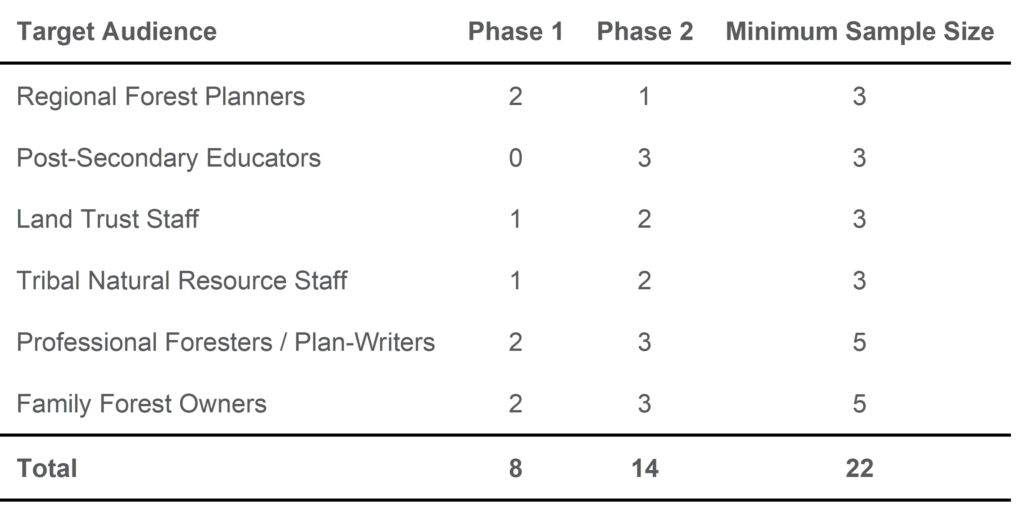 Phase I indicates the first 8 interviews with members of the Advisory Team. Phase II interviewees are being identified through a combination of snowball sampling and referrals by key informants. The Project Team is making an explicit effort to identify potential interviewees from racial and ethnic minorities and to ensure concerns for different forest types in the Pacific Northwest are reflected in the geographic diversity of participants as well.

Following the transcription of recorded interviews, the  Interviewers will be joined by PI Diaz to assign codes the interview transcripts to provide the foundation for subsequent analysis. Following the coding of transcripts, several Advisory Team members will participate in the clustering of key themes using an Affinity Diagram approach (known as the KJ Method). These interviews are intended to provide the foundation for the development of a User Requirements document describing the primary types or profiles of users, the main scenarios and use cases for new stewardship planning tools, and the functional requirements that would need be to met for these users to accomplish the primary use cases identified.

The education and extension activities for this grant are anticipated to being in Project Years 2 and 3. These activities are planned to take the form of workshops and webinars offering guided tours of the new technologies developed and time for hands-on experimentation and troubleshooting.

On December 8, 2020, the beta version of the web app Landmapper was debuted in at Tree School Online, an online version of the annual event organized by Oregon State University Extension. The webinar was recorded and is available online here: https://www.youtube.com/watch?v=uVWIU3K7_0I.

Over Q3-4 2020, Ecotrust's Director of Forestry Technology, Natural Resources Data Scientist, and Director of Design also facilitated several activities with the members of a Landscape Management Planning committee comprised of representatives from the Oregon Tree Farm System, Oregon Small Woodlands Association, and OSU Extension. These efforts included activities to elaborate on the use cases and desired functionality for stewardship planning that go beyond the first offering of maps and tables offered in the version of Landmapper that was released in December 2020.